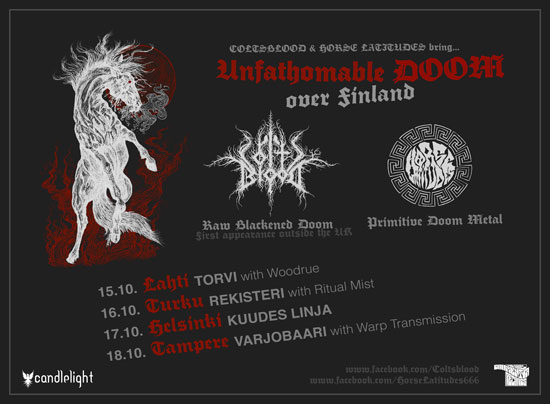 The UK’s own COLTSBLOOD are joining forces with Finland’s HORSE LATITUDES to bring their dark and brutal takes on heavy metal to the Finnish shores in October.

This will be the first time COLTSBLOOD are to perform outside the UK after releasing their debut album Into The Unfathomable Abyss earlier this year on CD via Candlelight Records and Vinyl via Burning World Records & Dry Cough Records.

They will be joining forces again with HORSE LATITUDES, who are currently supporting their split LP with ATOMIC CRIES on Doomentia Records, they also recently completed a successful UK tour with COLTSBLOOD & OMMADON following a crushing performance at the mighty Roadburn Festival. The tour dates are as follows…