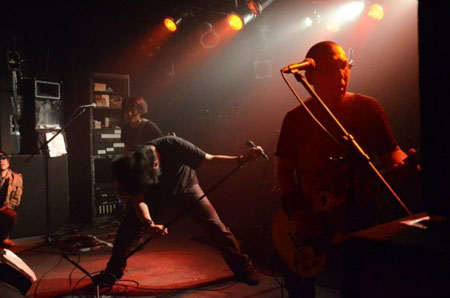 Having raided the death/doom underworld since 1996, Tokyo, Japan’s brutal doom metal eradicators COFFINS have once again entered their local Noise Room Studio, and are currently laying down vocals for their anticipated new LP, The Fleshland.

Although COFFINS seemingly always have a new release out — with a plethora of splits, EP’s, singles and a recent track released as part of Decibel Magazine’s Flexi Series having been released in the past few years alone — the band’s upcoming fourth album The Fleshland will be the first new full-length from the outfit since their devastating and acclaimed Buried Death album, released via 20 Buck Spin in 2008. Their first official release for Relapse Records, COFFINS will wrap-up their cavernous studio work on The Fleshland by the end of January, the album set for release later this year.

For now, ravenous fans of COFFINS’ brutal arts can get a bit of insight into the new album’s cacophony with a pre-production demo track of “Colossal Hole” — which will reappear on The Fleshland in its finished state — via Cvlt Nation RIGHT HERE.

Stay tuned for more info on the new album as well as 2013 live actions for COFFINS to be released in the coming weeks.