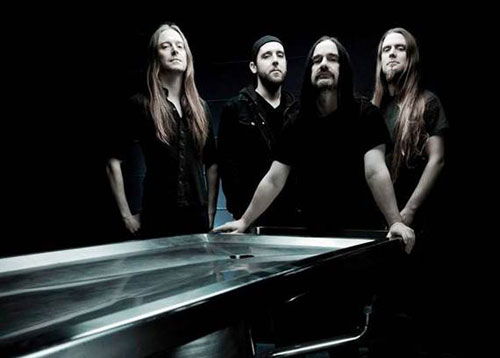 CARCASS has released the following statement regarding their new found partners in medical deviancy: “We are pleased to announce that we have found the perfect home for Surgical Steel, the first CARCASS album for, what, eighteen years?! We’ve inked a deal with Nuclear Blast for our new baby.

We have to thank Markus Staiger for his enthusiasm and belief in what he heard, but mostly his ability to take advantage of Jeff with a bad hangover when he visited the office in Stuttgart to let him be the first to hear the rough mixes. Nuclear Blast has managed to secure this release despite interest from all the main players in what remains of the metal ‘music industry’.

We’re also looking forward to working with our pals in the US Office, who have done favors for us behind the scenes over the last few years. On a personal note, Jeff  looks forward to his and label manager GerardoMartinez‘ friendship to come crashing down in flames and tears in a few months.

As long as we don’t mention ‘The War’ we think we’re going to do just fine with our new Teutonic home!”

Commented Nuclear Blast owner and founder Markus Staiger: “One of my all-time favorite UK Metal Bands signed recently to Nuclear Blast – it feels like a dream come true. When Jeff Walker let me listen to the new record I knew immediately that CARCASS made one of their best albums ever! It is a perfect mixture of Heartwork and Necroticism with a massive production to boot. The album is without a doubt just as perfect and lethal as surgical steel itself, and exactly what both old and new fans have waited for eagerly all of these years!

I am very proud to say, CARCASS – welcome to the Nuclear family. It is an honor to work with this legendary metal band.”

Adds North American label manager Gerardo Martinez: “First of all, apologies to the many that were wondering where that signing statement was the other day. Well, we didn’t anticipate the prenuptial agreement to take this long but here we are, and about to release to the world what many people said would never happen: a new CARCASS record!

All joking aside, this is a dream come true. All I can say is that even the biggest critic, Señor Walker himself included, will find this to be one of the best CARCASS albums. It already sounds like a classic and I can’t wait for people to hear it. ‘Time to die, die in pain’!!!”

CARCASS has released several classic albums over the years, including Decibel Magazine “Hall of Fame” inductees Heartwork and Necroticism – Descanting the Insalubrious, and their influence has changed the face of extreme metal with every consecutive release. Whether it was inventing gore-grind (i.e. Reek of Putrefaction, Symphonies of Sickness) or creating the template for melodic death metal (i.e. Heartwork), CARCASS has always made records by which bars were set and rules were broken. Upon the band’s dismantling in 1996, fans mourned the loss of the seminal act and longed that the group would return again one day. In 2007, the metal world got its wish as CARCASS reformed to play several  sold-out reunion shows around the globe. Once again re-motivated to administer a shot of cynicism and infectious riffs into the arm of a sickly metal scene, founding members Bill Steer and Jeff Walker began writing what would become the latest output of their highly influential career, Surgical Steel. Only the choicest of cuts were made, and blood sweat and tears were shed to bring us a record worthy of the CARCASS legacy. In short, Surgical Steel is just what the doctor ordered.