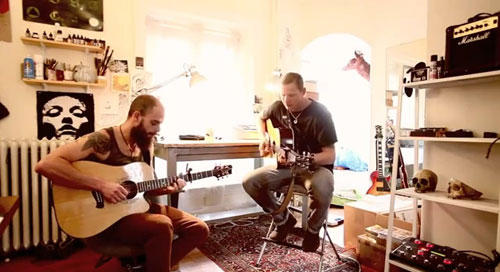 Baroness’s John Baizley and Pete Adams share an acoustic performance of “Stretchmarker” via their website (www.baronessmusic.com).  The clip, recorded in Baizley’s Philadelphia art studio (www.aperfectmonster.com), marks the first performance the band members have shared since their horrific bus accident in August.

“Simply put: it’s time to get back to it. Since my belated and thankful return to the USA (after our painful test in motor coach-aeronautics) I can definitively say I’ve exhausted my reserve of potential leisure activities (there’s not that many of them, after all).” explained Baizley. “I’ve come dreadfully close to boredom, and in those moments I can’t help but focus on my glaring physical infirmities.  Television offers little respite from this relative stasis; I’m sure by now I have sampled every biker-meth-dealer-zombie-low-talking-cop-crime-scene-serial-killer-real-housewife soap opera that is currently being broadcast (and there’s no small number of them).  I’ve tried to fill my weekly routine with as much physical therapy as possible but the truth is, PT is not fun, and its benefits come with a great deal of mental/physical/spiritual pain and struggle.  Furthermore, I believe I am getting a touch of Stockholm Syndrome when it comes to my doctors and therapists (the highlight of my week should NOT involve a clinic).  Music might be the best therapy I have right now.   Perhaps it’s both the cause and the cure (the thought has crossed my mind); but I feel lost without it.  Pete and I have just spent a long week surveying our musical wreckage and, surprisingly, we are quite well and intact.  Sure, there are some substantial obstacles to overcome before we write, record or perform any time soon; but we still have everything we need to get ‘back in’ that particular ‘saddle again.’  Most of my peers are familiar with such high-school-gym-teacher poeticisms as ‘risk equals reward’ and ‘no pain, no gain;’ but did any of us every really believe there was any real wisdom in those adolescent platitudes?  I didn’t.  I am, however, starting to understand the essence of these and many of our other favorite clichés.

As odd as it might be for me to write these ‘updates’ after 10 years of personal silence on the internet, I feel that I owe everyone who’s voiced or given their support to  Baroness a brief synopsis of our situation and more importantly a heartfelt thanks.  Honestly, it has made this ordeal much easier on me.  What little publicity that surrounds our crash has given voice to so many people who have shared their own stories of injury, trauma and struggle with us, and has furthered my own faith in the communicative and universal strength of music.  As every singer on every stage has nightly said, ‘we wouldn’t be where we are without you.’  Thanks everyone.  We look forward to seeing you soon.  Here’s a short clip of a song we wrote.”

Baizley recently did a number of interviews where he discussed Baroness‘s upcoming plans, telling Decibel Magazine:  “I have no doubt that within six months, we’ll be playing shows  again.”  The full interview can be read here and here.

Limited quantities of the Yellow & Green Deluxe 2xLP Hardbound Book Vinyl edition from the band’s personal collection are available via Baroness’s website (www.baronessmusic.com) with all proceeds going directly to the band.