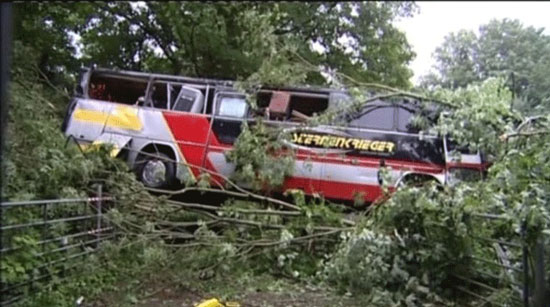 A lot of the Shaman readership have probably heard, which also made the national news, BARONESS were involved in a serious coach crash near Bristol yesterday while on route to Southampton as part of their UK/European tour.

The BBC reported last night…
“Two people on a tour bus used by the US band Baroness were badly injured when the vehicle fell 30ft (10m) from a viaduct near Bath.

Emergency services were called to Brassknocker Hill, in Monkton Combe, on the B3108 at its junction with the A36 Warminster Road at 11:30 BST.

Two of those on board suffered multiple fractures and had to be freed by firefighters. Seven had minor injuries.

Continue reading and watch a video report at the BBC website HERE.

Keep an eye on the bands Website and Facebook page where news of the accident will be posted as and when it becomes available.

Planet Of Zeus To Release The Riff At Desertfest 2013