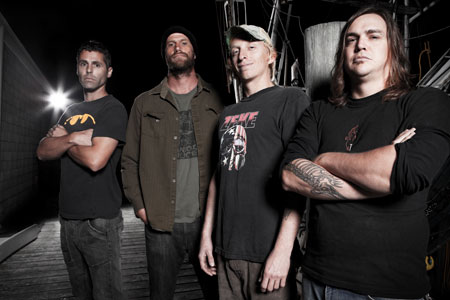 Relapse Records is extremely proud to announce the signing of North Carolina’s finest psychedelic, stoner-punks ASG! Impossible to pigeonhole, ASG has been wheelin’ and dealin’ in kick-ass rock n’ roll since forming in 2001. The band has previously released four albums with including their most recent, critically acclaimed effort Win Us Over in 2007. ASG has gained a reputation for their wildly energetic live shows, and has found themselves on the road with heavy-hitters Motorhead, The Sword, CKY, Fu Manchu, Torche and The Dwarves among others.

ASG plan to enter the studio in February 2012 to record their highly anticipated Relapse debut with producer Matt Hyde (Slayer, Children of Bodom, Fu Manchu). More details will be announced shortly. Additionally, the band has confirmed a string of Southern U.S. Dates in January plus a special appearance at next year’s Hellfest in France. A complete list of tour dates are included below.

ASG Guitarist / Vocalist Jason Shi commented on the signing:
“To be part of such a well respected music label like Relapse and to be included in their roster of bands both past and present is quite an honor for us. We plan to record our first release on Relapse in the winter of 2012 with Matt Hyde and are very excited for everyone to hear it! We are amping!”

So grab a bong, crack open a ice cold beer and get lost in the whiskey-soaked Southern melodies of ASG! Give them a listen over on their Facebook page at www.facebook.com/asgnation.