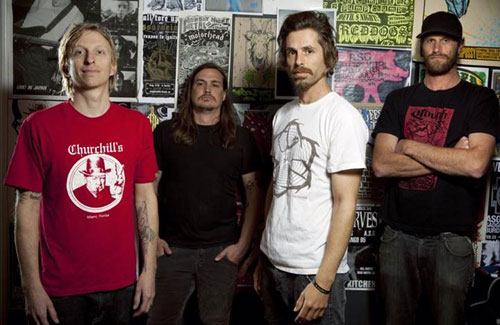 The first track on ASG’s new album, Blood Drive, ‘Avalanche’, is perfect as an all-encompassing metaphor for the band’s sound: a heavy, crushing phenomenon which gains momentum and grabs influences from everything that’s ever stood in its path.

ASG’s style vacillates anywhere from the catchiest, poppiest college rock to the crunchiest depths of sludge and the whiskey-soaked swamps of the South, all executed with experienced, veteran-like precision and a consistent beat which makes it impossible not to lose yourself in a blissful head bang.

This year has been a triumphant one for this North Carolina band, whose success with Blood Drive as well as their split record with Red Fang has created well-deserved excitement all over the world and has landed the four-piece spots at both Roadburn and Desertfest 2014. The Desertfes Crew couldn’t be more excited to have these guys on board!