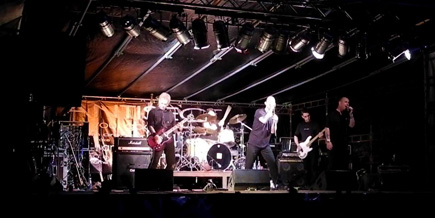 Some things are best left unfinished; others deserve another chance, and of that particular breed, a rare few choose to truly go for the throat and give it their all. Antisect are one of those bands.

“Antisect, for most people, will never be just about the music. It was always more than that.” – Pete Lyons

Earlier in 2011, the legendary UK crust punk pioneers shocked and delighted the metal/punk community with the announcement of a reunion, and a string of live shows – their first since the band first split in 1987. A triumphant performance at this year’s edition of Finland’s Puntala-Rock Festival was only the beginning. Since that fateful day, Antisect have lined up a slew of upcoming shows and made some very exciting plans for the future. After over two decades of inactivity, this fall/winter will see the current members of Antisect very busy indeed…

Founding member, guitarist, studio engineer and all-around punk rock lifer Pete Lyons has revealed plans to rerelease the band’s seminal (and highly influential) 1983 debut In Darkness, There Is No Choice via venerable UK label Southern Records. In addition, the band will be recording a limited edition 10″ of unreleased and rerecorded material, to be made available at their upcoming live shows. This past weekend, the band returned to Scandinavia for a pair of pre-Samhain shows in Denmark and Norway, and are gearing up for a string of gigs in November/December/January, in the UK and beyond!

Fan-filmed live footage from their first show in 24 years at Puntaala Rock in Finland can be viewed below.

WELCOME TO THE NEW DARK AGES!

BAND INFO:
After releasing a couple rough demos in 1982, ANTISECT released their unwitting masterpiece In Darkness There Is No Choice in 1983 on Flux of Pink Indians’ Spiderleg Records (also known for releasing essential recordings by Amebix, The Subhumans, and FOPI themselves). The album hit the UK Indie Chart at number 4, and is an indisputable landmark in the crust punk/anarcho-punk pantheon. , Their debut was followed by Out From the Void EP (1985), a live split with fellow rabble-rousers and legends in their own right Sacrilege, and a trio of live albums that bring us up to present day – 1991’s Hallo There How’s Life, 1993’s Peace is Better Than a Place in History, and, in 2010, the Leeds 02.04.86 live collection. Their music’s darkness, hopelessness, and biting social commentary struck a chord within England’s disaffected young punks, and spread like the plague across oceans and borders. Alongside Crass, Amebix, Discharge, and Anti Cimex, Antisect helped ignite the punk rock scene and introduce the concepts of anarchism and animal rights to the masses. Their name is legendary, the impact undeniable, their music, immortal.

Read the full statement at www.antisectofficial.com