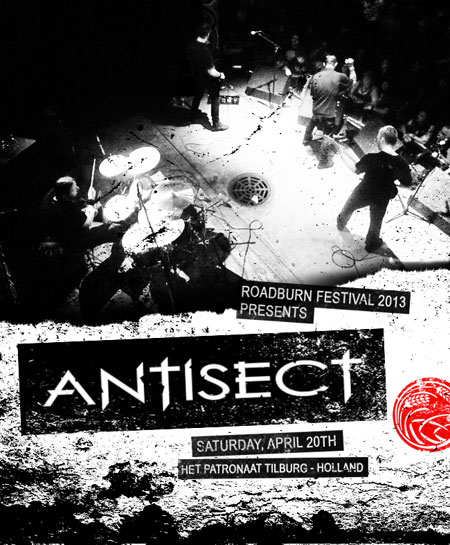 Roadburn are excited to announce that anarcho / crust legends Antisect have been confirmed for Roadburn Festival 2013 on Saturday, April 20th at Het Patronaat in Tilburg, Holland.

“Twenty-four years since their initial demise, Antisect are once again an active force. Always far more than just another rock ‘n’ roll band, their significance in the UK underground and beyond has never been fully acknowledged. As the years pass by more and more people are starting to appreciate their significance as a source of inspiration to many other bands and individuals, both lyrically and artistically.”

“Their message of individual freedom was as much liberating as it was inspirational back in the 80s when ‘Anarcho-punk’ really did seem to offer an alternative lifestyle. Whether they would have considered themselves Anarcho-punk is another story, but as with a lot of other bands and artists at that time, they carried their own torch through the bleakness of society. Early recordings show obvious influences and whilst the sound was killer raging hardcore punk, it wasn’t until the release of the seminal debut and only album In Darkness There is No Choice was released in 1983 that their true individuality was realised.”

“From then on they forged forward, always approaching their music with interesting twists and turns, and were certainly one of the heaviest bands that Britain had to offer. Their metallic edge and uncompromising lyrical stance had a huge influence on what would eventually become known as ‘Britcore’, a naff term adopted by the British music press towards the late 80’s. Unfortunately, the only recordings that exist from the post – In Darkness days are one 7” (Out From The Void) and a multitude of live soundboard recordings and bootlegs that have been in circulation ever since. Founding member Pete Lyons gives some straight talking answers on subjects relating to things past, present and future” — Lee Dorrian.