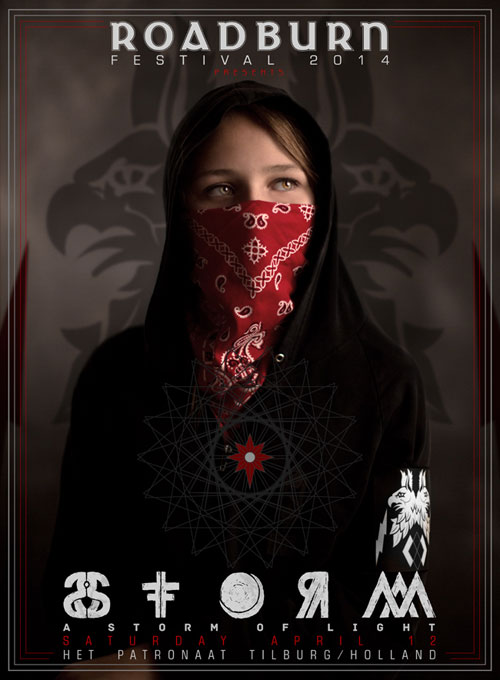 A Storm of Light will be making a welcome return, having graced the stage at a previous Roadburn Festival, and Josh Graham – STORM‘s main man – has also graced the Roadburn stages with Red Sparowes and Neurosis.

A Storm of Light explores a similar sonic territory to that of early Neurosis and Mastodon, but through their own unique vision. STORM takes the dynamics and the colossal energy of their apocalyptic, pummeling doom-sludge into the faster and more melodic side of heavy.

Graham‘s pronounced vocals are definitely a driving force, giving A Storm of Light a distinctive melody and some hookier moments too, although the band never looses the brooding atmosphere or the heaviness. Billy Graves‘ “machine-gun drumming” propels the band “with pulverizing intensity.”

A Storm of Light are about to release their new album, Nations To Flames, through Southern Lord. The album has been christened “the soundtrack to our damnation,” in a near perfect review by About.com, “On Nations to Flames, A Storm Of Light have an intensity that burns with the fire of creativity and artfulness while still relaying the message of how seriously doomed mankind is. It may not sound like Cathedral or Pentagram, but it’s still all about the doom. A band that refuses to rehash the same formula has quite possibly brought us one of the year’s best releases.”

Walter & Co have much to look forward to when A Storm of Light will storm the barricades and set Roadburn Festival 2014 alight on Saturday, April 12th at the 013 venue in Tilburg, The Netherlands.