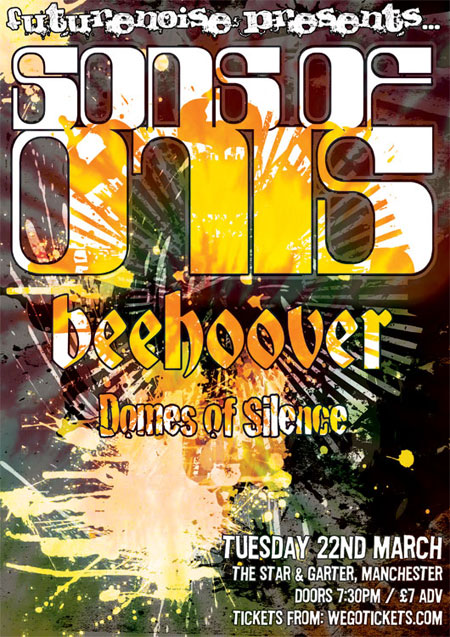 Bit of a strange pairing really, if you ask me – twitchy, techy, twiddly bass/drums duo Beehoover teaming up with Toronto’s finest heavy-ass space cadets Sons of Otis to level as much of Europe as is physically possible with their arsenal of tectonic rumbling, quasi-operatic glossolalia, intricate fills and acid damage – but, hey, it aaaaaaall worked out just dandy in the end.

First up tonight we had Oxford wastrels Domes Of Silence, a mostly-bearded five piece purveying some stoner-garage filth with a distinctly Doorsy feel. Yup, you heard me. I did a quick poll of those around me, just to be sure I wasn’t aurally hallucinating, and the answer came back – definite hints of The Doors in there. Maybe it was something in vocalist Sean Parkin’s throaty snarl that evoked a rough-arsed Jim Morrison, or just a general bluesy swing to the band as a whole, but either way Domes Of Silence contain trace Doorsian elements. Other points of reference would be The Stooges, touched upon in the latter part of their set, and more than a little hint of The Cult…except this would be The Cult with the ‘cock’ replaced by a weightier set of balls. No ‘babybabybabybaby’ and stretching words out beyond the boundaries of their allotted syllables HERE, uh uh, just good old sweaty beardy ROCK. Sure there’s a whiff of the pub-rock to ’em, but y’know, it’s early days yet. Given a chance, these boys will shine. 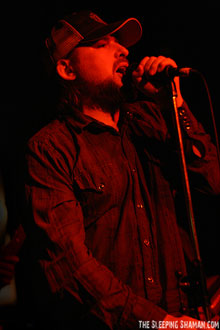 Next up is German drums ‘n’ bass duo Beehoover, coming on like a significantly metalled-up version of Japan’s Zeuhl-monsters Ruins. Switching nimbly betixt quieter, complex mathy parts and full-on balls-out bass riffage that verges on Pantera territory at times, Beehoover are a unique beast of several parts. The phenomenally busy yet hard-hitting drums of Claus-Peter Hamisch skitter across, thump into and anchor the action, allowing Ingmar Petersen to play that bass of his in a way that approximates Lemmy as much as it does Les Claypool, all the while hollerin’, a-yodellin’ and a-yellin’ up a storm in a way that would make Serj Tankian scratch his hairy bonce with dismay. Petersen vocalises like a man who has swallowed several eels and is alternately angry at them, and joyfully affirming how much he enjoys them wriggling around his throat. The weirdo. Schizophrenic to the extreme, Beehoover make a gloriously individual racket that you just can’t help being won over by. Particular standouts, for me, would be ‘Rocking Chair’ and, in particular, ‘Spirit & Crown’, a tune at once claustrophobic AND epic, life-affirming AND pessimistic, and just plain ass-kicking. Still can’t get a handle on ’em? Think Nomeansno possessed by System Of A Down whilst having a simultaneous nervous breakdown and religious experience. Only BETTER. 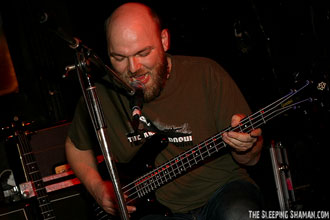 Sons Of Otis lumber onstage to a hypnotic churning throb, an endlessly-looping ‘ka-CHUNK’ generated by one of the numerous pedals in vocalist/guitarist Ken Baluke’s arsenal before caving our ears clean in with an unceasing onslaught of massively bottom-heavy, RIDONCULOUSLY thick, fuzz-sloth behemothery lasting over an hour. The Sons hit SO damn hard that drummer Ryan Aubin busts right through his snare drum at the climax of the opening salvo and has to cadge another off of Beehoover.

Think ‘Lysol’-era Melvins playing Saint Vitus covers with Blue Cheer’s equipment and you’d be in the right ballpark, sound-wise. Riffs swing like elephant balls, drums are smashed into atoms and basslines contribute to tectonic shift, while heavily delayed vocals slur out of the speakers at thoroughly deafening volumes….yet ALL retain a crystal clarity. You can HEAR the edges on those stratospherically inclined, planetarily heavy riffs. These guys have their shit locked-down TIGHT, using their own custom-made ‘OX’ pedals to generate the waves of lysergic tar swamping through the P.A.

I have to be honest and admit that I have a lousy memory for song-titles, but I CAN tell you that the second track ripped into tonight reminded me greatly of early Monster Magnet – y’know, when they were GOOD – and the fourth track, entitled ‘Vitus’, turned out to be a subtly mangled version of Saint Vitus’ immortal classic ‘Born Too Late’, only virtually BURIED under an avalanche of incredibly cosmic phasing and heavy oscillation. Even under all that ‘psychedelic broma-seltzer’, to quote Captain Beefheart, it sounded like a bloody mountain falling down in slow-motion. 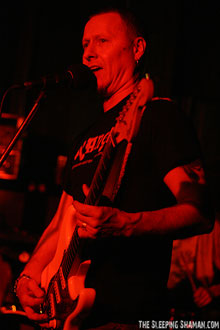 The Sons broke into a jam next that contained aspects of Mountain’s ‘Mississippi Queen’ and Led Zep’s ‘Whole Lotta Love’ and ‘When The Levee Breaks’ – Frank Sargeant’s colossal bass locked-in TIGHT to Aubin’s monolithic thudding whilst Baluke peels off liquid, cascading solos ghosted with ridiculous amounts of sustain, milking his strat for all the creamy goodness he could conjure forth.

Next up was a total ripper that sounded like ‘Twin Earth’ on 16RPM, followed by ‘Haters’, a track that sounded EXACTLY like an aeroplane taking off over a herd of mammoth, while being buzzed by the Melvins in a UFO that is being warped by the electromagnetic pull of a nearby black hole. I shit you not.

By this point, my head was literally battered and I was unable to form articulate speech due to the oscillations produced by The Sons vibrating at the exact same pitch made by my larynx when speaking. Ending with a new track that pulverised in the same way that early Melvins track ‘Don’t Piece Me’ does, The Sons packed up, got back into their flying saucer and flew back to their home planet, leaving the ruins of earthly devastation smouldering behind them, the audience and venue having been flattened like crisps under bison.

Now, I’m an old git, and I’ve been gigging for almost 25 years and TONIGHT was one of the ONLY times that I have ever come away from a show feeling physically battered and with a ringing in my ears that lasted for a couple of days…..and if THAT isn’t recommendation enough then there is no pleasing you. By Crom it was worth it. 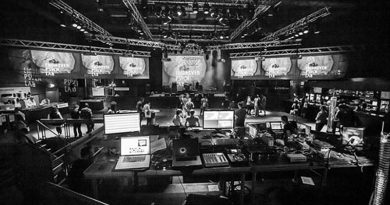 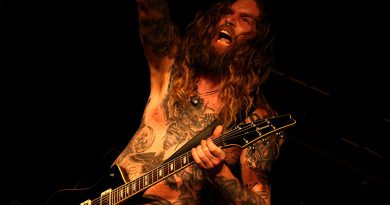 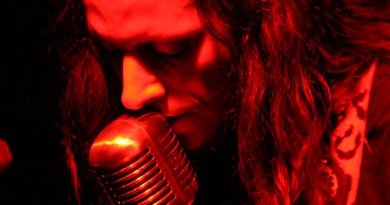