The first time I heard The Sword, I became a fan. I remember telling my wife that we have to see them live if they play close. Within a few days they announced a show with Clutch is Tampa. We weren’t disappointed because they sounded amazing, put on a great show and introduced me to the DIY aspect of bands.

Guitarist Kyle Shutt sheds some insight onto his gear and how he creates outstanding music. On top of all the projects he’s involved in, he goes into detail about his fascinating project with his 3 year old daughter.

I’d like to start this interview a little different than the others because you’ve done something really unique – Kyle Shutt And The Dirty Restaurant Of Death – an album you created with your daughter! Making it must have been an amazing experience! How did that project come about?

That’s a fun project for sure. It wasn’t a full album, just a 7″ single with two songs, but she’s only three years old so let’s cut her some slack. During the early days of quarantine, we sat around a lot of the time making up funny songs and Dinosaur stuck. Since she has a little record player and a bunch of 45s, I thought she would love to have her very own record in her collection, so we had some amazing art made for it and had a lot of fun with the release.  Hopefully we can do one single a year so that when she’s 15 she’ll have a discography.

OK back to business [haha]. Do you prefer tube amps or solid state amps? What amps are you currently using and do they differ from the studio to the stage?

I’m really not too partial to one or the other, it’s all about what sounds the best. I love my Big Crunch 50 watt tube amp, and I also love a little Quilter solid state head. In the studio I like to think that there are basically no rules when it comes to making sounds, but when I try to take all those different sounds to the stage, I prefer to have one amp, guitar, and pedal board that can handle all the jobs. Simplicity is key when playing live so that there are less things that can go wrong.

When dialling in a tone on your amp, do you start with a clean tone or add a little crunch before the pedals?

I like to add a little crunch before the pedals so that my clean tone can break up a little if I need it to as I transition from soft to heavy parts, so that the change is more dynamic.

There are an endless amount of pedals to choose from. Which pedals have made it to your pedalboard and are any of them custom made for you?

My current board consists of an Earthquaker Devices Palisades, Afterneath, and Levitation, a Fulltone OCD, and a POG. The Sword’s bassist Bryan Richie is an avid pedal builder and has made some really unique stuff for me over the years like a custom wah, a phaser, and a delay.

My guitar is my own signature Reverend guitar, which I love. It’s loaded with my signature Railhammer Pickups, a Humbucker in the bridge and a Humcutter…

Last but not least are the guitars. What guitars are you using and do you have a preference in single coil, Humbucker, P90 or active pickups?

My guitar is my own signature Reverend guitar, which I love.  It’s loaded with my signature Railhammer Pickups, a Humbucker in the bridge and a Humcutter, a double wound single coil style pickup, in the neck.  I’ve played active pickups before, but I feel they’re more appropriate for arena or festival shows where you need as much consistency as possible. Arena and festival venues can vary wildly from show to show and having a guaranteed tone from an active pickup can be reassuring.  But when I’m playing clubs and theatres I prefer passive pickups.

I try not to be too much of a collector. I’ve actually sold a lot of my gear to the point where I now only really own what I need to tour and record with, which is a Big Crunch 50 watt amp head, 4×12 Marhsall cab, 4×12 Orange cab, 2×12 Orange cab, a plethora of effects pedals, and my signature Reverend guitars.  The pedal that I’ve had the longest, since 2003 is my Maxon Distortion Master, which I used on the first four of The Sword’s albums.

There is a finite amount of notes and chords but an infinite amount of music being created. How do you create unique sounding riffs and songs without repeating yourself or others?

Much of my material has a twinge of melancholy, which I try to consciously avoid at times, but it always seems to creep in there. I like happy sounding songs that are about sad things, or any kind of duality I suppose. Maybe the answer is in there somewhere.

For me personally I have to set goals for myself, deadlines. That way I stay motivated to finish projects and will have it out of my system so that I can move on to the next thing. If I have an off day I just put the guitar down and work on something else. I typically bite off more than I can chew so there’s always something to do.

I try and record myself playing and sometimes while I’m playing I think a riff idea sounds good, but listening back I second guess what I played. How do you know when a riff or song is worth keeping?

For me I usually know that a riff is worth keeping if I can remember it forever immediately after writing it.  If I come up with an idea that I have to record to remember, chances are I probably won’t think it’s as special when I come back to revisit it.

I saw The Sword open for Clutch in 2013 in Tampa and that was an amazing experience. When you guys first got on stage there was an issue with the sound and after the second song you guys managed to fix it and sounded incredible. How do you go about getting the sound right with so many variables at different venues?

Your FOH sound engineer is a crucial part of your live show. They take all the gear on stage and translate it through a massive sound system, so they’re the ones who have to deal with the most variables. I’d rather play rock clubs than theatres, only because theatres were made to resonate so that you don’t need a PA. Putting a loud rock band in a giant theatre can be like playing in a cavern where you can’t hear anything because of all the sound bouncing off the walls.

To warm up I play the major scale from F# to high F# and back down again. It warms up the strings, the neck, and the hands. Tune after that and you’re good to go.

Thanks for taking time out of your busy schedule to answer my questions. I really appreciate it. Is there anything else you would like to add?

Thanks to everyone who’s ever supported me, I wouldn’t be here without you.

The Sword are currently supporting their compilation albums Conquest Of Kingdoms and Chronology: 2006–2018 that are out now via Craft Recordings. 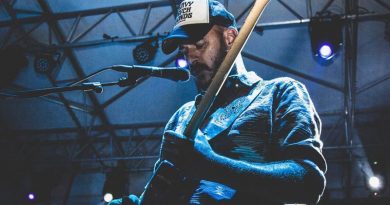 In Search Of Tone: Matteo Barsacchi Of Mr. Bison