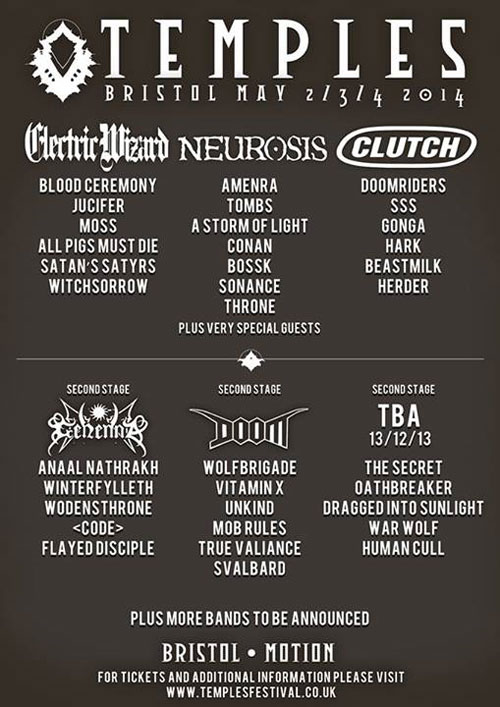 With such a vast array of festivals catering to connoisseurs of all things slow, fast, noisey, experimental and just plain heavy running all through the year, and all over the world, it’s a great time to be a music fan. There’s a veritable embarrassment of riches on offer for those who like it heavy, from internationally-renowned event such as Maryland Death Fest and Roadburn, to consistently excellent UK events like Damnation, Supersonic, DesertFest and All Tomorrow’s Parties.

But this year one event has stood out from the pack.

Temples Festival is the name on everyone’s lips when talking about the 2014 festival circuit. From the instant intrigue upon hearing of the pedigree of the promoter, to the rabid proclamations of devotion upon the announcement of that first headliner, there has been a near-constant buzz among music fans from all over the UK and beyond, with ticket sales reported from many far-flung corners of the world.

Bristol-based DIY promoter Francis Mace has been booking tours and promoting shows across the UK for years now, giving fanatics the chance to see the likes of Eyehategod, Pentagram and countless other pioneers and progeny of all that is heavy.

As creator, director, promoter… well, basically the man behind Temples Festival, he has thrown all his experience into this massive undertaking. His hard work and dedication have clearly paid off, as the festival boasts three of the biggest names in modern metal; psycho-delic doom miscreants Electric Wizard, post-metal pioneers Neurosis and Maryland groove machine Clutch, as well as a whole host of other top-shelf bands, covering everything from d-beat to doom. Don’t just take my word for it, look at the list of already confirmed bands:

With yet more acts to be announced, and the excitement over Temples Festival already building to a frenzy, I spoke to Francis about that incredible lineup, Bristol becoming the new home of heavy, and more. Read on… 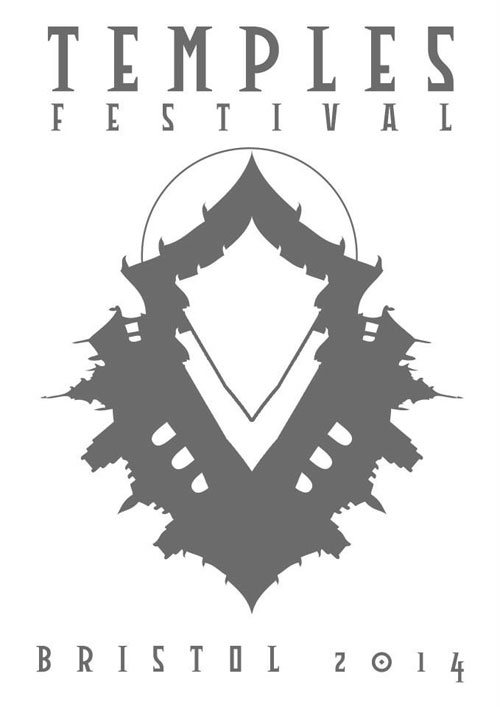 Obviously there are plenty of great smaller-scale UK fests being put on all year round, in addition to established events like Damnation, Supersonic, DesertFest, All Tomorrow’s Parties, etc., but for a first-time fest run by a DIY promoter to have attracted the names you have is especially impressive. If Temples becomes an annual event, do you worry about how you’re going to top this inaugral line-up?

Fortunately not, I have a very specific idea of how I want Temples to develop over the next 3-5 years, and truthfully curating line-ups is the aspect of promoting that I enjoy the most so the challenge of maintaining the quality we’ve achieved this year is something I’m looking forward to! I’m actually eight bands deep into the Temples 2015 line-up already and I have every intention of retaining focus on underground bands who are largely unrepresented on the UK festival circuit, so all things considered – I’m very excited about topping the Temples 2014 line-up!

Compared to many such fests, the line-up is remarkably diverse. Whilst obviously all falling under the more general ‘HEAVY’ bracket, you’ve got everything from powerviolence to doom, a plethora of punk ranging from post to crust, and even a smattering of black metal thrown into the mix. In addition to this you’ve got three of the biggest names in contemporary metal; Electric Wizard, Neurosis and Clutch. Do you think having such mass appeal, at least as much as possible within the metal genre, has been key to the early success of the festival?

Absolutely, both the attention & success we’ve had from the moment we announced the first 16 bands have been a resounding reaffirmation of people’s excitement at seeing bands like Wolfbrigade, Doom & Vitamin X on the same line-up as Neurosis, Doomriders and Blood Ceremony. I think the diversity on offer – at least within the brackets of ‘heavy music’ is one of the major appeals of Temples, and although there will always be cries of ‘you didn’t book X band/genre’ – the fundamental approach I’ve taken to booking this entire event is clearly illustrated in the line-up itself and I can’t help but feel that that is one of the main reasons we’ve gained so much attention so early in our establishment.

It’s not even 2014 and almost everyone I know has already gotten their tickets. How does that make you feel, to know you’ve created an event that has not only the UK heavy music scene buzzing, but is gaining attention on a worldwide scale?

I feel truly flattered that so many people are holding this line-up in such high regard, as frankly it’s an accurate reflection of the styles of music I have an interest in promoting. Furthermore, 2014’s line-up is a great preview of what’s in store for the future editions of Temples Festival. The fact that we’re selling so many tickets on an international scale is a mind-blowing realisation. I for one didn’t expect that (to date) 30% of our first year sales would be international, and to see people so actively dedicated to the bands they love that they’re willing to travel to the other side of the globe is nothing but admirable.

Having reported sales from as far away as Russia and South America, do you think that Temples could do for Bristol what Roadburn has done for Tilburg, to make it a city that music fans think of as the UK’s own ‘riff-filled land’?

In some respects yes, I think it’ll certainly help reaffirm Bristol’s reputation of catering for the weird and wonderful! Over the past few years it’s become increasingly evident that the heavy music scene here is thriving and we’re frequently seeing bands swerve major cities specifically to perform here – Monster Magnet being a perfect example.

You’ve been bringing underground acts to the UK for years now, giving fans the chance to see the likes of Pentagram, Eyehategod, The Melvins… the list goes on. In the case of Pentagram, and more recently Nails, it was each bands first UK tour ever.

Temples aside, what’s been the show or tour you’ve been proudest of in all your years doing this?

The first show I did for ‘the Wizard comes to mind. That was a real turning point for me a promoter as I started to take things a lot more seriously after that booking, and subsequently ended up doing Corrosion of Conformity, Eyehategod, Church of Misery, Gallows, Unsane & Black Breath that same year – which helped me further establish myself as regional promoter of all things heavy in the South West.

More recently the sold-out show for Monster Magnet and Cult of Luna’s mind-blowing set a couple of weeks after, both of which were shows I’m very proud to have promoted. I have to say the Nails gig last month is the highlight of my working year, I planted the initial seeds to make the UK tour go ahead in Feb 2013 and to see it all come to fruition was a true pleasure, the fact Nails absolutely eviscerated every venue they played in was the icing on the cake!

What was the very first show you ever put on? Did you ever think it would lead to eventually curating your own internationally-recognised event?

The first event I promoted was for Shaped by Fate and Decimate at The Croft in Bristol circa 2005. Truthfully the only reason I put that show on was because my band at the time (Shadow Law) collectively felt that we weren’t playing with the right bands in our hometown so I stepped up and put together a line-up I thought we would benefit from, the show went extremely well and I got a taste for promoting, but did I ever think it’d lead to something like Temples? In two words… fuck no.

To curate and promote something of this scale and ambition must be quite a monumental undertaking. Was there any one thing that gave you the impetus to really go for it, to decide that 2014 was the year? Or has this been a long time in the making?

Towards the start of 2013 I reached out to the right people and pitched the project, every one of them responded enthusiastically and we locked down 2/3 headliners within the next few months – allowing me to start developing the rest of the line-up and ensuring our inaugural year was representative of where I wanted Temples go in the future. Within a month or so I had 50% of the line-up in place and it became abundantly clear that the timing was perfect for all the right bands – so I steamed ahead and put years of contemplation into effect, the result of which is Temples Festival 2014.

With a few months to go until lovers of all things heavy descend on Bristol from all over the world, do you have a message for everyone planning to attend?

First and foremost – thank you! The response we’ve had for our maiden year has been completely overwhelming, if you’re coming to Temples 2014 then you are contributing towards something that will cater for underground music fans on an annual basis, your interest & contribution is integral to Temples Festival and for that – we thank you!

You’re about to witness the inception of something very special. We’ll see you soon…

Thanks to Francis for taking the time to talk to The Sleeping Shaman, and for putting together an event that will doubtless see many of both our readers and writers descend upon Bristol to worship at Temples.

Temples Festival will take place over the weekend of May 2nd – 4th 2014 at Bristol’s multi-purpose venue Motion.

Weekend Tickets are on sale now from www.templesfestival.co.uk while Day Tickets are available exclusively through www.bristolticketshop.co.uk & www.gigantic.com. 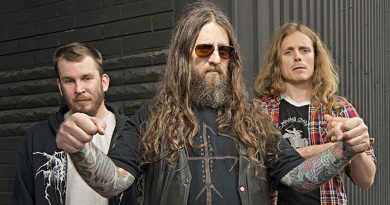 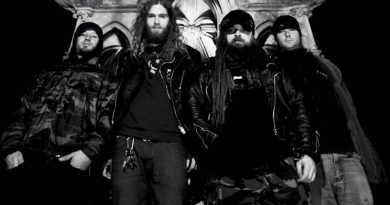