Can you believe that!?! Robert Sörling of Spelljammer actually apologized to me saying his answers may be boring. Well, Robert I think these answers are far from boring and I fairly sure our readership will feel the same. In fact, it’s a perfect follow up to part one last week with Lowrider guitarist Niclas Stalfors.

Spelljammer have definitely left a mark on the scene with two outstanding EPs (Vol II and Inches From The Sun) and 2015s debut full length album Ancient Of Days, giving you have plenty of hard hitting music to dive into if they’re a new name to you. And, if that isn’t enough, don’t worry because on the 26th February, they’re releasing their sophomore album Abyssal Trip through RidingEasy Records. Robert was very kind to answer all my questions.

As a guitar player myself, I always (and still do a little haha) want more and more guitars. However, I’ve learned that no matter how many cool guitars you have, you really need a good amp. What amp or amps do you have currently and do you use the same for recording and live?

Even though I’m kind of picky with my sound, I’m not really the gear head (some) guitarists tend to be. Amps have come and gone but the only one I’ve kept throughout the years is my Orange TH100. Nothing fancy, but it’s loud, easy to dial in a cool tone and it takes pedals well (and sounds great without any pedals too). And, it’s very reliable. I had some cool vintage stuff but when stuff breaks down on you and you spend all your money on fixing it, it’s just not worth it for me.

With that said, I WISH I had the energy and money to look for, and buy more, cool stuff. However, when it comes to recording it’s another story. Our new upcoming album is the only one so far that I actually recorded with the TH100 – I used it for the live tracked guitar in addition to a borrowed Reval Mark I (150W beast) for the overdubs. On our last album (Ancient Of Days) I played a 70s Hiwat 100 and I loved it. I could own that! Speaking of amps I think it’s important to remember the importance of the cab – it really makes a huge difference!

the only one [amp] I’ve kept throughout the years is my Orange TH100. Nothing fancy, but it’s loud…

There’s an endless amount of FX pedals to choose from, but which have made it to your pedal board and are any custom made for you?

No, no custom made pedals in my set up. I had a fuzz made for me once, but it looked cooler than it sounded. I’ve still got it somewhere.

I use a TubeScreamer for some dirt and tone and of course a little tube saturation from the amp, but the clean sound is fairly clean. Other than the TubeSreamer in my current (live) set up there’s a Dunlop CAE Wah Pedal, a BOSS RE-20 (reverb/delay), a Mooer Ninety Phaser pedal (because it’s chep and fits into my pedalboard, haha) and a RAT for fuzz.

When recording I usually try out different fuzz pedals and end up with the one that suits the amp being used – among favourites are Big Muff, Swollen Pickle, RAT or just the amps gain with no pedal in front.

Last but not least are the guitars! What guitars are you using and do you have a preference in single coil, Humbucker, P90 or active pickups?

For guitars it’s the same boring answer – I don’t own lot’s of them and usually stick with the ones I like. The first SG I ever got was a White Faded 2007, and it’s still my favourite guitar. Love the feel and the look. I recently had it refretted because I play it all the time, and it was really worn. It detunes pretty easily though, so I don’t use it when playing live that much. Our songs are pretty long and it sucks to realize when you reach the outro that you’ve gone out of tune.

Not sure what pickups it’s loaded with, but humbuckers for sure. Occasionally I try something else but I always end up selling and sticking with SGs, at least for Spelljammer stuff. I recently got this 80s Aria Pro TS-400 dirt cheap on a flea market and I’ve come to love it. I actually ended up using it on some parts on our new album.

Do you have a guitar, amp or pedal that you’ve had for a long time and will never part with?

Beside the Gibson mentioned, the first fuzz pedal I ever got was a standard Big Muff Pi. I used it on our first album (Inches From The Sun) and on Ancient Of Days. Sound wise I guess you could get the exact same thing from any music store, but it holds such sentimental value that I hope I never lose it. It’s well used, worn and dented, and I will never part from it.

The first SG I ever got was a White Faded 2007, and it’s still my favourite guitar. Love the feel and the look…

In many cases it’s takes me a few listens to appreciate a band. In the case for Spelljammer I was hooked 30 seconds into the song Mountainside. It’s such a memorable and heavy riff! How do you create unique sounding riffs and songs?

Thanks! I actually just recently found the first demo of the Mountainside riff and it was surprisingly lame, haha. For some reason I called it Cheerleader Tryouts… Mh, I wish I could answer that question. In general for me the best ideas come when I’m not trying at all. If I say ‘ok, now I’m going to write a really heavy riff’ the outcome is usually the opposite. And, that’s the hard part – not trying. It’s a mindset that just comes when you least expect it.

It’s also sometimes really hard to go further on a really great riff, I just get stuck because I like the first riff so much, that in respect of that I have to come up with something even greater, and everything just falls apart, haha.

When I play guitar, I try and play new things but many times I find I play the same riffs over and over. I will also play those same riffs and feel I was worse than the day before. What do you do for inspiration if you’re having an off day or to keep from playing the same things over and over?

Well, I have a kid so I never have a day off, haha. Man I recognize that, some riffs are like ticks. I still play the stuff I practiced as a 16-17 year old over and over. (read: Appetite For Destruction). I think the inspiration comes from creating something new. I tend to get bored and impatient trying to learn something someone else has written. For that reason I have never been that keen on playing covers – it’s like it’s a waste of time when you could have a go on your own stuff instead.

Like learning to play someone else’s stuff, practicing can get really boring but I force myself to do it…

I try and record myself playing and sometimes while I’m playing, I think a riff idea sounds good but listening back I second guess what I played. How do you know when a riff or song is worth keeping?

I think the best thing to do is just let your idea rest for some time, so that you almost forgot it and so that you listen like it’s the first time you hear it. Also, give it more than one chance. I’ve found that it depends on the mood, the idea you think suck one day, can feel better the next.  I also think it’s important to fail. I think that’s how you learn and develop (it’s a cliché because it’s true).

Warm-ups? Like learning to play someone else’s stuff, practicing can get really boring but I force myself to do it. Especially when I haven’t played in a long time, I get frustrated when I know I can do better and that motivates me to practice. I usually try to practice stuff that strengthens the muscles because if my muscles can’t keep up, my playing gets (even more!) sloppy and inaccurate.

Thanks for taking time out of your busy schedule to answer my questions. I really appreciate it! Is there anything else you would like to add?

Spelljammer and their new album Abyssal Trip will be released on 26th February via RidingEasy Records and pre-orders are available over on the labels webstore. 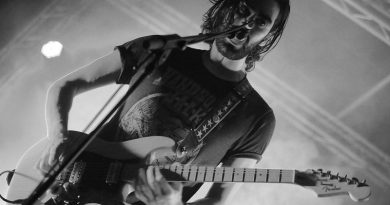 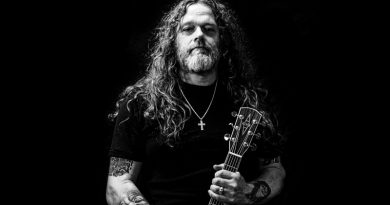