An explosive and impressive set of songs at just over thirty minutes in length and seven tracks, I’m sure will blow older fans away, plus hopefully win the band a lot of new followers. A highly rated review by myself was published recently and hopefully this will point fans of dark ,hypnotic and atmospheric rock and roll in the direction of this new release.

I was keen to probe further into what made the band tick so presented them with a few questions and the hope that they would consider them well and answer thoughtfully and truthfully, which thankfully they generously did.  Andrew Hall – guitar/vocals, Casey Garcia – drums and Dave Teget – bass, collectively Mountain Tamer open up about how they started, touring, influences, COVID-19 and other relevant issues affecting a busy rock n roll band  in 2020. So sit back and dig a bit deeper into the minds of Mountain Tamer and let us see what they have to say for themselves.

You began in San Francisco, what motivated the move to Los Angeles, plus have you found the music scene to be more competitive or very different to San Francisco?

We loved the music scene out there but we just weren’t getting the traction we needed as a young band. On top of that  we all wanted to experience a new city with a completely different scene.  That city ended up being LA. We had already made quite a few friends while touring in LA so being welcomed into the scene and booking shows was as stress free as you could hope for.

And how did you all meet?

We all grew up in the bay area and went to a lot of the same schools. Dave and Andrew learned to play guitar together forming their first band when they were 13. Casey didn’t really know Andrew or Dave at the time and was playing with different groups. Andrew and Casey became good friends during their senior year of high school and put on a benefit concert together for a school project which featured both of their bands at the time. Following the show they began jamming together often but knew they were missing something. Andrew, being good friends with Dave decided to invite him to join. We had our first jam in Dave’s garage and Mountain Tamer was born.

Two years since your last release ‘Godfortune/Dark Matters’. How have you changed as a band in that time?

We’re the same awesome band, we just have more people listening to us now.

Touring with Dead Meadow, Weedeater and Fatso Jetson I’m sure were all interesting experiences but can you tell me the hardest lesson you’ve learnt from being on the road with other bands and what it was?

Knowing whether to keep partying or when to call it and go sleep in the van would be a big one. But honestly touring is such a humbling and unique experience. More than anything else it has shown us how compassionate and caring complete strangers can be to you while you’re on the road.

Being a three piece band can bring its advantages because there are only three of you to consider financially, but most importantly creatively, how do you all manage to balance your input and opinions about how the music should sound?

The way we approach songwriting has always been a democratic and highly collaborative process. We try to keep it as organic and natural as possible so whatever we come up with never sounds forced. If one of us isn’t feeling it then none of us are.

Which brings me to each individual’s tastes. Do you guys differ hugely in that area, because it sounds like each one of you brings something to the table, by what you listen to and like?

We all have the artists or genres we like most, but we also enjoy a lot of the same stuff. We all try to keep an open mind when it comes to new music and sounds because we feel it keeps the writing process fresh. If we kept pulling from the same batch of influences things would get real stale, real fast.

Which brings me to genre classification. Most bands dislike being ‘put in a box’ but it seems the same old descriptions are applied to your sound. I understand that when you’re concentrating on making the music, these things are irrelevant, but does it bother you how your music is classified/described?

It doesn’t bother us too much but we obviously don’t always agree with everyone’s assessment.  We try not to limit ourselves when it comes to genre, but people will always want to slap a label on something no matter what.

As an atmospheric, hypnotic, psychedelic rock band (my little joke), who at the present, and in the past, do you most identify with musically?

As an atmospheric, hypnotic, psychedelic, glitter doom rock band it’s pretty hard to identify with anything other than pure freedom.

‘Black Noise’ was a real standout track for me on the new record and I would love to hear you continue more down this route. Any plans to do more tracks like this in the future?

We are currently writing new material but it’s in such an early stage of development we don’t really know where we are going with it quite yet.

I mentioned Jane’s Addiction and Warrior Soul influences in my review for ‘Psychosis Ritual’, did this surprise you and were you pleased?

It’s not necessarily surprising to us but those two bands have never really been on heavy rotation for any of us.

Number one is getting over to Europe as soon as possible. We’ll see you freaks soon…

Seven tracks, thirty two minutes and thirty seconds of music on the new record. Was it a conscious decision to limit the album to only half an hour or was it just the way it came out in the studio?

The length was definitely a conscious decision. We set out to write something that was raw and straight to the point.

COVID-19 has obviously affected the whole industry worldwide this year, but can you tell me what future plans and goals you have for the band?

Number one is getting over to Europe as soon as possible. We’ll see you freaks soon! 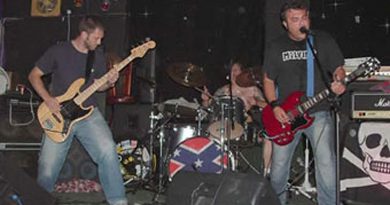