I found Horse Latitudes through the Doom Forever, Forever Doomed forum. The name just jumped out at me as something different and I was compelled to listen. What I found was stripped down pummelling twin bass occult doom with a great pace behind it, complemented by great “clear” vocals. They really do beg the question “Who needs guitars?!”

In early February 2012 I caught up with the band as the release of their second full length was imminent.

Can you give us an introduction to Horse Latitudes?

Vellu: Formed in 2009, Horse Latitudes is a three piece band dedicated to playing ritualistic slow and primitive metal with stripped down instrumentation. We hail from Helsinki, Finland.

Harri: I play drums and do the singing, both Vellu and Heidi play bass guitar.

The name Horse Latitudes is quite a striking and intriguing name. Where did it come from and what does it mean to you? Does it come from The Doors song title or the deeper Maritime meaning?

Vellu: I have had a close connection to the sea from a very young age, so the maritime meaning is more striking to me. Harri, who is a big The Doors fan, came up with the name, but I think it should provoke wider associations than just a song from the 1967 album.

Harri: That’s right. For example one chance for a broader interpretation is given by our own song with the same name on the 2010 demo. This world of humans is leading to its end, to the point where the illusions of the omnipotent man are to be torn down, and speaking with the metaphor of sinking ship, it’ll be realized that in the end we really do not differ from the horse, those to be thrown off board.

Was the decision to have 2 bass guitars and no guitar a deliberate move or did it occur from circumstance?

Vellu: Both. The band started with the idea of playing slowed down Hellhammer worship with two bass guitars. I was good friends with Heidi, who also happens to be a bass player, so the formation was quite natural. Things have progressed since then, but at no point have we looked for a guitar player to join us.

Heidi: Yes, I remember when me and Vellu first thought to start a band playing only very down tempo drone with some mid-tempo influences. Then I met Harri and he became the drummer. 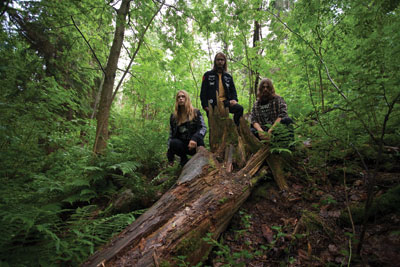 Do you feel that lacking the guitar makes it more challenging towards song writing without it becoming too regressive?

Vellu: Our choice of instruments is of course a challenge, but also allows us to expand on their traditional territories. There’s no “wrong” way to go about it.

Heidi: I think our band isn’t lacking any instruments – that’s what we are and it’s our thing! Creating riffs for two basses is interesting and sometimes of course challenging.

I never meant to suggest that the band was indeed lacking anything, quite the contrary, if anything the term (one I generally abhor) “less is more” certainly applies here.

Harri: Yeah, it makes the song writing more concentrated on the most essential, the riffs, as they will be presented on their simplest form, the core of bass. And the drums are also to underline that, so you might say that’s the main point of the choice.

How have you been received in Finland on a local & national level? Have you had much success overseas?

Harri: I really do not know about success either in Finland or overseas. But I do know that there are some people following the band quite globally, and as we have been in contact with good people in (both southern and northern) America and have had chances to play at some cool gigs in Finland, I guess the situation is quite good for us.

Vellu: I think people are starting to get used to the idea of what we are doing. Closely following in the footsteps of those who have paved the way before might bring more immediate recognition, but is ultimately unsatisfying. We are doing this solely for ourselves, playing exactly the kind of music we want without any thoughts for how others might perceive it. But of course it is nice to hear that people outside the band might get something out of it, too. 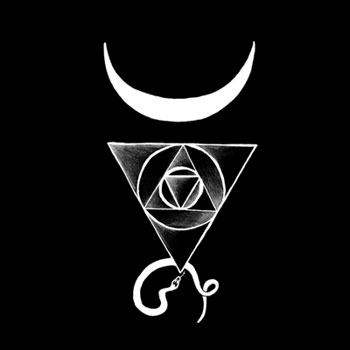 Does Horse Latitudes have much live action going on? How do you feel your music conveys in a live setting?

Harri: We do play shows once in a while and I think the music fits well on those situations, as with the proper volume level the sound has its full potential, making it as much a physical as a sonical experience. Also as the music is mostly created playing live together with the same capabilities than in the live setting, and recorded to present the current sound of the band, so us three playing live is quite natural to us.

Vellu: We have heard comments that our live sound can be very soothing, which I think is a great compliment. As with our songs, there’s not a whole lot of extra or unnecessary elements to our live actions.

What about equipment? How do you differentiate your bass guitar sound from each other?

Vellu: First of all we use different tunings: Heidi plays in standard tuning, while my bass is tuned to BEAD. This helps to differentiate our roles in sculpting the sound.

My amplifier of choice is the 300w Verellen Meat Smoke, played through Barefaced Super Fifteen 2×15”. I tend to add some reverb to the sound, as well as other effects when needed, but no distortion or fuzz pedals. The amp has a really powerful distortion sound on its own. On Gathering I used the Mountainking Megalith fuzz, but I prefer the current more organic sound by far. Both of us have our distinctive sounds that in my opinion work well together.

Heidi: I play through an Acoustic solid state head and Orange OBC115 1×15”. Much of the sound comes from an old Marshall Drivemaster pedal. It’s actually intended for guitar, but works wonders with bass (when it happens to work at all…)

How do you compare your material on the recent split 12” to the material on 2010’s Gathering on Aurora Borealis?

Harri: The split contains a one 10 minute song from us, called Flame of Will. It was created and recorded in August 2011 along with the songs to appear on the second album Awakening. This particular song was the one that had the most life and essence of its own compared to the other songs, so it was the one to be released on its own.

Vellu: The song is somewhat faster (that’s still mid tempo, mind you!) and more aggressive than most of our previous songs. We used an old harmonium and electronic organ for the intro and outro sections of the song, so that’s another new element for us. 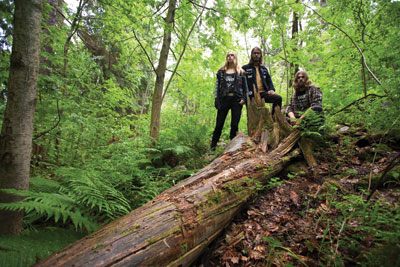 How did the deal with Aurora Borealis come along? Was it from the 2010 demo?

Harri: Yep, Andrew from AB picked up the demo from a Finnish mailorder, liked it and got in touch with us very soon after that. As we were working on a new material for an album, ‘Gathering’, it came very naturally that Aurora Borealis would release our debut album.

Can you tell us about the forthcoming full length? How will that compare to the rest of the material?

Harri: The forthcoming full length, ‘Awakening’, is quite a natural continuum compared for example to ‘Gathering’, both on the musical and thematical level. It stresses the ideas little further, but I don’t think the changes are too radical or anything, as it’s an organic process of doing what feels right. There’s no pressure to create anything radically different, nor to limit ourselves to the music we’ve done previously

Vellu: I feel like Awakening is a darker album than Gathering. We did not actively have such goal in mind, but this is the natural end result. The production is also heavier and more organic. Working with two bass guitars in the mix is a challenge. We have worked with Kalle Nurmi, a good friend of the band and a great sound engineer, on every release, so he has a good understanding of what kind of sound we’re after. This time the album was mastered by Mell Dettmer, who did excellent work to ensure the bottom end is there without excessive mud and hum.

Where do you draw lyrical influence from?

Vellu: Harri writes the majority of lyrics. My interest in eastern esoteric religions and their philosophies is reflected in the lyrics I’ve written, best exemplified by the second track, ‘Dissolution’, on Awakening.

Heidi: I have written only one set of lyrics on our first album: a track called ‘Seas of Saturn’. But I`m also interested about writing and most of my ideas come from nature.

Harri: Inspiration for the lyrics comes from the variety of sources, said with one word: the world, be it inner or outer. Many times the lyrics are dealing with the things that aren’t possible to describe straightforwardly, at least not for me, and that’s why the lyrics are often representations of the landscapes of inner world or of the subjective point of view through symbols and other images. It’s about the openness for the manifold of being, namely life in a broader sense around us: essentially other than purely rational and exploitative manly thinking or the world of mankind in general at all. So that is also the point of view I am trying write and sing the lyrics from.

Can you tell us about the symbolism on your releases?

Harri: The visual symbolism deals a lot with the lyrical one, reflecting the ideas behind the combination of the lyrics and the music, but for me the power of the very simple yet very fruitful universal and archaic symbols is the most attractive and so the visuals keep dealing quite much with the abstract and non-representative forms, on the level that isn’t so easy if at all possible for other kinds of expression. They’re all linked for me and opening the meanings from different sides. It’s very important to me that we all three do the artwork, and that it’s essentially created by us, making the whole a kind of a collective expression.

Of course strong imagery and the old symbolism of the myths in the world we’re living in is influencing my own interpretations and sometimes it might be the background and starting point to my creations. For example in the concept of the song and also the album ‘Gathering’ is about the myths of dichotomies between the natural and human world, between the feminine and masculine, releasing and gathering the forgotten spirits and unleashing the hidden power within.

What is next for Horse Latitudes? What are your goals for 2012 and beyond?

Harri: Next thing will be releasing the album and the split material we’ve recorded last summer and doing some shows, for example with The Moon Mistress in Moscow, Russia on May 5th.

Vellu: Another split release is in the works and will likely be released in 2012 too, but we can’t reveal the other band just now. Expect news about that in the not-so-distant future.

Many thanks to Harri, Vellu & Heidi for their great replies, and best of luck with the new album.

More info on Horse Latitudes over at www.facebook.com/HorseLatitudes666 . 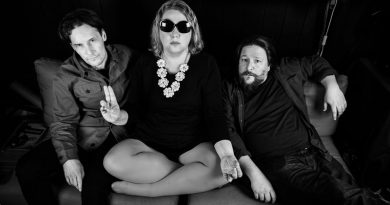 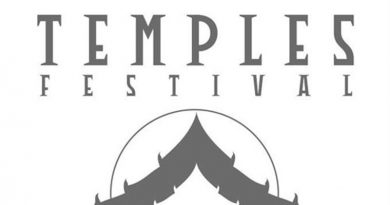