I’ve been in touch with Matteo, the bassist from Italy’s El-Thule for about a year now and we conducted this interview via email during late 2005 and early 2006. They kick out some seriously intense Rock n Roll Groove and having already supported the likes of Truckfighters and Dozer, 2006 looks like it’s going to be a busy year for them so read on to see what what’s in store for these Italian Stoners and check out their Myspace page where you can download their Promo 2006.

Hello to Matteo and the rest of El-Thule, thanks for taking the time to answer a few questions so we might as well start with a brief history of the band, its current members and releases to date?

Hi Lee, hi everyone! So, El-Thule formed in 2001 after my return to Italy from 6 months in Mexico. When I (Matteo aka El Comandante) was living in South America, I felt the necessity to play again in a band so I decide to start a serious project once at home and I did it. The first person I asked to join the project was my brother Andrea (aka Mr. Action), he came out from an experience in a melodic hardcore band called Mugs and decide to start a new band immediately with a lot of enthusiasm. We only needed a drummer, we spread the voice and Guido (aka Gweedo Weedo) joined the band after some weeks of “knowing”. The band was finally formed and we started to write the first songs. The line up since 2001 is Mr Action on guitars and vocals, El Comandante on bass and Gweedo Weedo on drums. At the principle we were influenced by the punk rock’n’roll Scandinavian scene (The Hellacopters, Gluecifer) and we started to work on some of Mr Action’s riffs recycled from Mugs. While the band was “cementing”, we started to grow an identity and you can feel the evolution comparing songs like “Hang On A Tree” with “Sombrero Galaxy” for example. We published a promo called “Astro Spiral Raceway” in 2003 and then the full-lenght album called “No Guts No Glory” in 2004. Both the releases are self produced. Right now we’re working on the second album that will hopefully be ready in the second half of 2006.

And how have things been over your summer break?

We had a nice summer, I started a new job in august and the other guys took a break going on vacation with their girlfriends. After the summer break we started to work on some new songs, we also prepared for the last gigs of 2005.

Where did you get the name El-Thule and can you give us a rough translation of what it means?

The name “El-Thule” comes from the village of Santa Maria Del Tule in the state of Oaxaca in Mexico. I and Gweedo Weedo were there at different times and were really impressed by the Tule tree that’s there .It’s probably the biggest tree we’ve ever seen so we decide to honour that nature’s wonder by calling the band El-Thule…we just added an “h” because it sounds better! 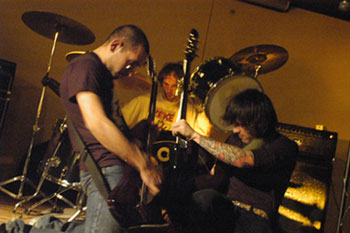 And where do you draw your inspiration?

Musically speaking our inspiration comes from the music we listen to and the gigs we usually go to see. We listen to a lots of different kinds of music and all that stuff influences our approach in writing music. Another essential thing for our inspiration are the bands we toured with. We’ve learned a lot of things especially from bands like High On Fire and Dozer. Lyrics come from the life we’ve lived. Our songs talk about what happens to us and to our friends in this world, in these times. I’m proud of our lyrics because we do our best to not talk about stupid things. We want to communicate something and in my opinion we’re almost good to do it.

November 2004 saw the release of ‘No Guts, No Glory’, it’s now been available for little over a year now so can you tell us how well its sold & what kind of feedback you’ve had on the 11 tracks?

We’re happy! For a self release we’ve had a lots of positive feedback around the globe. We sold around 150 copies only at the live shows and I don’t know how many copies by internet and the stores in Italy. We recovered all the money we invested in the production and that was our priority. The only problem is that we don’t have any distribution in Europe and that’s a pity. The most important thing was to inform the people into this kind of music that in the scene there’s an Italian band called El-Thule. We did it and we also did more. We played in Sweden, Belgium. Austria and Switzerland. We’ve also opened for bands like Zeke, Colour Haze, Yawning Man, High On Fire and Dozer. For a new band with only one album out I think we did a great job, we’re very proud of it and now we want more! We learned lots of things and now we’re ready to bring out a new album, more true, more El-Thule than “No Guts, No Glory”.

You’ve not long released your Promo 2006 which features 3 new tracks, what we can expect from these and how does the new material line up against your older songs from the excellent ‘No Guts, No Glory’?

Right now the new promo CD is ready and it’s possible to listen to it from our Myspace profile (link below). The new material is surely an evolution of what you heard in “No Guts, No Glory” but there’s more. We’ve grown up a lot and I think that now our music is more personal than 3 years ago. Now we have our style, our sounds and an approach to the music and this is very different from the “No Guts, No Glory” period. In the new songs there’s less punk and more heavy riffs, we experimented with other styles like stoner/doom and some ‘metal’ things. 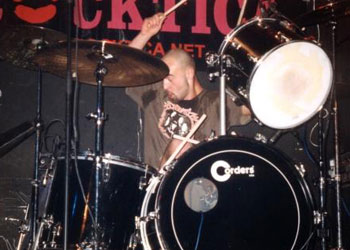 And where can people get hold of a copy?

We give it for free only at our shows. We don’t want to sell it because it isn’t a professional product. We reordered and mixed it in only 4 hours, it’s only a promo for giving to labels to give them an idea of the new direction taken by the band. Everyone can listen to it from our MySpace profile.

You also hit the road in late 2005 to play a few shows with Dozer in support of your new release, can you tell us how these gigs went and did you air any of your new material?

The gigs with Dozer were an incredible experience! We learnt a lots of things from them and we really want to thanks Dozer and their crew for the possibility they gave to us! We played only new songs during these 4 gigs with them and it was a sort of test for see the reaction of the audience. The people liked it and that showed us that we’re on the right way!

Talking of gigs, your a band that likes to play live, so can you give us an insight to what the scene is like in Italy and what kind of feedback have you had from your live shows?

I think that the live shows are the most important thing for a band in these times. The music industry is changing and the only way to come out is to kicking asses during the gigs. The feedback we had from our shows is good. We worked hard and the audience is fortunately giving us an idea of we’re growing. We’re only at the beginning, we have to continue to work hard because we have to grow better under all the points of view! The scene in Italy is very underground. We had a lot of great bands but is really difficult for everyone to come out. We don’t have so many clubs like in the rest of Europe to perform this kind of music, it’s really difficult to create a compact scene but we’re trying to do that. We’re building a sort of “family” trying to unite all the good bands, all the contacts with the clubs and all the audiences. And something happens. It’s a long way but we’re convinced that it’s the only way to do something in this country that is historically suspicious with rock music. 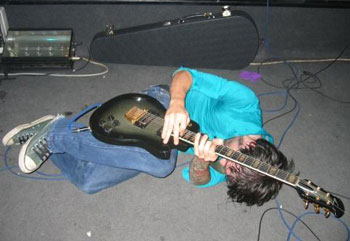 You also supported Truckfighters throughout Sweden back in April 05 which must have been an amazing experience for you, so can you tell us how you feel this went and what kind of reaction you got?

It was simply great. Truckfighters are an amazing band formed by great people and musicians, we’re really good friends and we want to thanks them for all the help they gave to El-Thule. Going to play our music in Sweden was the realization of a dream for us especially if we considered the fact that we only have a full-length album out right now! The reaction was great! We really love being in Sweden and especially the Swedish people. In Sweden (and in all the other European countries we’ve played) we felt respected like true musician, we never felt this kind of respect here in Italy before! The people in Sweden are more “musically opened” than in Italy. We felt the audience’s passion while playing in this country and I think that’s the best thing to receive back for a musician.

And what else can we expect from El-Thule during 2006?

A lot of work! 2006 will be a busy year for us. We want to finish our second album hoping to release it via a label. That’s our priority. The new songs are great and we have the responsibility to create an amazing album. We really believe a lot in the musical direction we’re taking, we’re creating the “El-Thule’s style” and we’re arriving where we want to arrive, now we have our sound, our style and our personality and we really hope to be able to create a valid product. We’ve got the right ingredients and we only have to cook it in the best way! We’re also working on releasing a DVD with the new album (we’ll have two formulas: CD+DVD and LP+DVD). We’ll also want to get back on the road again because we love to play live and we want to play everywhere supporting the new album. Once it’s ready we want to do a European tour and play everywhere. There’ll also be the possibility to try to organise some gigs in the US…let’s see what’ll happen!!!

Members of El-Thule are also involved in a side project ‘T.O.D.O’, can you tell us what the connection is, how it differs from El-Thule and what their plans are for the future?

T.O.D.O is the side project of El-Thule’s drummer Gweedo Weedo! He’s the singer, the guitarist and the bass guitarist and he’s supported by Z behind the skins. This project started like a joke but soon became a serious thing. After a break of a year T.O.D.O are ready for hit the road, they’ll probably open the next El-Thule’s gig! The music of T.O.D.O is raw & aggressive. It’s something that reminds me of the Melvins with a sort of punk violence side. In the media section of El-Thule’s official website (link below) you can download the 4 track homemade promo they recordered last year!

We’re still unsigned…if there’s a label in the UK interested in producing our second album we’re looking for it!!!

I want to thank you very much for the possibility to spread the voice about El-Thule.

We’re doing our best for create what we want to create and your support it’s very important for us. I can’t wait for coming over UK to play some gigs! See you on stage!!!

You can check out the latest goings on with El-Thule at www.el-thule.com