London Doomsters, Blood Island Raiders have been making more than just waves in the UK since 2002 with their excellent self financed ‘For The Sake Of Clarity’ CD and more recently their split 12″ with Among The Missing. They’ve also managed to clinch a host of top support slots including the likes of High On Fire, Cathedral, Alabama Thunder Pussy and Gwar! The Reverend Al kindly agreed to take time out of his busy schedule to answer a few questions for The Sleeping Shaman.

Hey Al, hope alls well, firstly can you give us a brief outline of the history of the band and it’s current members?

Warren sings, Seamus plays bass, Paul on drums and I’m the guitarist. I met Seamus about about 12-13 years ago – outside an Overkill gig – and we’ve played in various bands ever since. The last was Evil Knievel, which was kinda Skynyrd meets Danzig. That fell apart but in it’s death throes we found Paul. I was introduced to Warren by Steve who runs the Crobar here in London. We needed a singer and he kept saying he wanted to try out. We thought we’d found someone and so we were like “yeah, maybe.” Obviously when he did come down it was apparent that he was right for the band. This was in 2002. We did our first gig in December of that year, supporting Cathedral and Electric Wizard; a real trial by fire for Warren as the rest of us had played together quite a bit. It went pretty well and for the most part things have just got better.

And what are your main influences on both a musical & lyrical stance?

Musically, I write the riffs myself and then we shape it as a band. My main influences are Trouble, Vitus, Pentagram, Danzig, Grand Funk, Maiden, early Metallica, Slayer, Celtic Frost/Hellhammer, Bathory (esp. the ‘Viking’ period), COC, UFO, Scorpions, MC5, Bang!, Deep Purple, Rainbow, Saxon, Angel Witch; basically a whole cross section of rock and Metal. Both Sea and I listen to a lot of punk and H/C, old school death and black metal. Paul and I are huge Hawkwind fans. Paul is really into drummers like Bill Ward, Ian Paice, Vinnie Appice and Neil Peart. Warren is into KISS in a big way, also The Beatles and Zeppelin. Bands we all agree on are the likes of Dead Kennedys, Rainbow, Sabbath, Misfits and Danzig, Trouble, and also Kyuss but I try to avoid doing Kyuss type riffs to much, I’m more of an old school metal guitarist. The lyrics used to be quite personal for Warren but more recently he’s moved more to classic metal themes like Satan and serial killers. He always wrote about that anyway but the personal ones only work when there is something specific to talk about whereas Satan always works.

Your name Blood Island Raiders is a little unique with a different spin to the usual monikers you get, so can you tell us who come up with the idea and where it’s origins lay?

Sea is to blame for that. He took it from a song by the old Thrash band Decimator. They took it from an old ’60s b-movie. It certainly means we won’t get mixed up with anyone else. And it’s definitely ‘metal’! 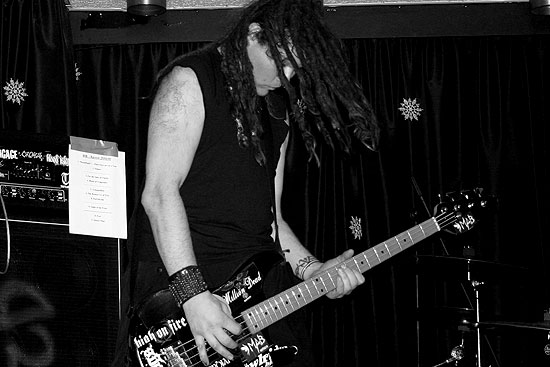 You’ve done the rounds promoting your own material with self financed releases such as the excellent ‘For The Sake Of Clarity’ CD and more recently the (extremely limited) EP ‘Night Of The Frost’. How would you say sales have gone and what kind of feedback have you received?

Not sure how many FTSOC CD’s we’ve sold to be honest but the feedback has been pretty good; we’ve had some good reviews. People seem to like the songs. Frost was extremely limited and in fact we only did 30 in the end. I think we gave out about 500 copies of the first demo, and you can still download it from the site.

I was a little disheartened to find out the ‘Night Of The Frost’ EP was only available at gigs, so sadly I was unable to get hold of a copy, but luckily the title track has just been re-released by ‘Withered Hand Records’ in the form of a split 12″ with ‘Among The Missing’, so can you tell us how this came about and once the initial 300 copies are sold out, will there be a re-press?

We had recorded some stuff and were trying to work out what to do with it. I just happened to mention the song to Tim from ATM and he said they had a really good song they wanted to do. It sort of just grew from there. Donny decided he wanted to do things properly and started a label to put it out. A friend of ours, Michael Corran, had offered to do artwork for us and as he was so good (check out Orange Goblin’s ‘Theiving… ‘ and ‘Some you win…’ covers!) we gladly accepted. We hope it will sell out, though it’s up to Donny if he wants to repress as it’s his money and he’s really gone out on a limb to do this. It only came out last week but we’ve a pretty damn good review in Kerrang! already.

And how did the launch Party at the Crobar go?

That was a blast. Quite literally. It’s about the size of my bedroom and Paul is one of the loudest drummers around. The place was packed out, though as it’s small it’s not too surprising. 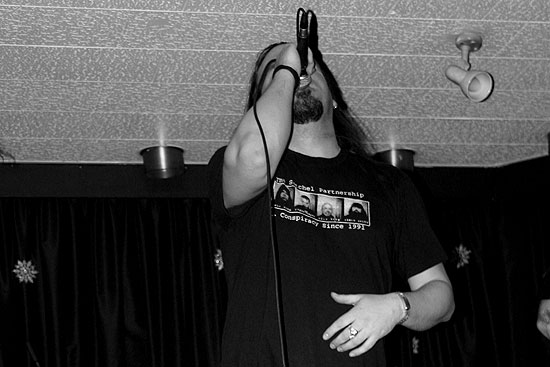 You’ve managed to clinch some excellent support slots over the last few months, namely Alabama Thunder Pussy, High On Fire, Cathedral & Firebird, can you tells us how these went & how well your live set was received from both fans and the bands you played with?

On the whole the shows have been good. The High On Fire show we went on too early and so a lot of people missed us, but then we did that show so we could get more Mean Fiddler promoted shows – hence the GWAR gig a month or so later. We can’t have been too bad ‘cos Warren and I bumped into Matt Pike at the Crobar just before the tour started and he remembered us from the last time we played with them (with Mastodon as well). We’ve played a couple of shows with ATP and we seem to have done pretty well. They seemed to really dg it, and Erik took some stuff back home to spread the word there. As for Cathedral and Firebird, I know them pretty well anyway. I tech’d for Bill when Firebird toured with Fu Manchu, and I’ve known Cathedral since I was in Mourn (91-94) with Will who is Lee’s partner in Rise Above records. Both bands have given us good feedback. Bill isn’t into heavy music anymore but he liked watching Paul play! We get a lot of positive comments from other bands, even about my lead playing which just goes to show you really can fool all of the people…

And how did the recent support slot with Gwar come about, that must have been an erm… an interesting show to say the least?

Yeah, I mean we couldn’t really try and compete with that, we just went out and played our balls out. I read some dodgy online reviews that said we didn’t go down well but to be honest, that’s bollocks. We had a pit for about half the set, which considering we were an unknown band to 99% of the crowd – 1,000 people – suggests a pretty decent response. And Beefcake even bought a CD and then got us to sign it!?!?

You’ve also recently laid down 7 new tracks on a friends 16 track desk, can you tell us how you feel this recording went, which songs you recorded and are there any plans to release these, either self financed or through a label?

These were just done to have some of the new songs on tape. They’ve come out well so we may release a couple. Possible cassette only, just to be difficult!

I can’t do a BIR interview without mentioning your website which I gotta say is very impressive being pretty much bang up to date with all the latest news, gossip, gig info etc. Seeing as you look after it yourself and that it probably takes up quite a bit of your free time, with hind sight do you think it’s been a worthwhile project to help spread the BIR name about & would you recommend other bands to follow suit?

Warren does it all himself. His sister and a one of his friends know all about this stuff so he just gets them to show him what to do and then does it all himself when he’s got time, or bored at work. It’s pretty simple really, he said from the beginning he didn’t want any Flash as it’s really annoying waiting ages for pages to load just for some pointless animation. Especially for those who don’t have broadband. If you have someone in the band who can do it and who is on the ball, then yes it’s definitely worth doing yourself. 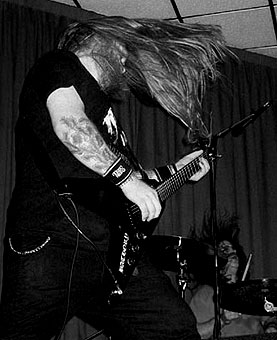 Members in BIR are also involved a few other projects, namely TBAC, Merkin and Armed Response Unit, can you tell us a little bit about these and what can we expect from them in the future?

TBAC was a crust band that Seamus started years ago with some friends, and they had Rob Kenyon singing, he was the guy who got prosecuted for wearing the Cradle of Filth shirt – which is probably fair enough!! They aren’t around any more but Sea is now doing ARU which is again H/C but a bit less Discharge. He’s singing and has Seedi from Palehorse and Garuda playing guitar. They will gigging soon. Merkin is the band we nicked Paul from. It’s Paul – drums and vocals, Pat who we recorded with the other week and plays guitar with us live on Night of the Frost sometimes – guitar and vocals, and Warren is playing bass and singing. It’s more stoner sounding than BIR but I’m not sure what’s happening at the moment. Seamus and I also have a band called The Hill but that’s in the initial stages. It’s a super group, sort of and so we have to fit it in around loads of other bands. We’ve got to wait for Capricorns to do their album and then get it done before Goblin get busy again, whilst fitting it in around In Conference With Jackals and all our stuff.

On a lighter note, you guys had a name drop by Ben from Orange Goblin in Metal Hammer late last year, for those that missed it, would you care to elaborate on Paul’s (hopefully highly embarrassing) legendary Dio tattoo quote?

Warren, Paul and I went up to Bulldog Bash last year with the Gobshites when they played. Paul obviously got very drunk as usual and on the way back we were talking about tattoos. Paul announced that he wanted to get a Queens Of The Stone Age tattoo on his cock but when he went to get it done they had to make a few alterations. He ended up with ‘Dio’, in braille.

Never Settle For Less Than Metal!

Check out all the latest goings on with Blood Island Raiders at: www.myspace.com/bloodislandraiders 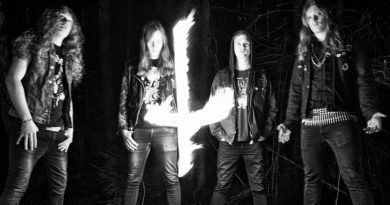