Thank Cheesus of Chedderlehem the year is nearly over! 2020 has been one of the most trying years for all across the globe, testing us and at points showing the best of humanity and, unfortunately, sometimes the very worst. It’s been a tough year for me personally, but thankfully one thing has stayed true, keeping me busy and most of all sane. 2020 has seen one of the most wonderful years in music that I can remember and I think all of the emotions of these trying times have been poured into, not just music, but any type of art.

2020 has had some real highlights for me. I started writing for The Shaman, which has been an absolute blast, getting to know the other reviewers and subsequently having those guys empty my bank account regularly with their great suggestions. I got to do my first ever interview with my man Steffen over at Lycanthropic Chants. I also poured myself into my own personal blog (SleeveItToMe Reviews) which has kept me busy during the long periods away from my family, and allowing me to show the world of Instagram my shiny head and ever expanding stomach.

I mean Alice In Chains have finally reissued Facelift! Can you believe that record is thirty years old! As mentioned the albums coming out this year have been insane, I could’ve done a top fifty and the years not even done yet as I’ve still got albums from Frozen Soul, Undergang, Wombbath and Akhlys to grace my doorstep and further infuriate my fiancée! Anyway, enough rambling, let’s get to it.

So my first entry onto this list is courtesy of France’s Esoctrilihum titled Eternity Of Shaog released via I-Voidhanger Records. Firmly planted in black metal, it’s a maddening expedition into the mind of Asthâghul, the projects only member. I mean based on just the cover alone, this thing is incredible. Titled The Dracula Of Mars, it was created by Alan E. Brown and is such a striking introduction. The record is a mind bending ride of rich soundscapes, sonic madness, infectious riffs and heaps of ideas. It’s incredibly dense and features a cacophony of layers that are all sewn together like a rich tapestry. It really is something to hear. This is not intended to be picked up at certain points. You need to dive in and let it envelop you so you can hear all the elements, allowing yourself to get lost in what Asthâghul is conjuring. So if you like your black metal well produced and full of ideas, then I think you’ll dig this as much as I did.

9. Undeath ‘Lesions Of A Different Kind’

Rochester, New York death metal monstrosities Undeath have finally unleashed their debut full-length (review) on the world and in 2020 what a perfect year to do it. Released via Prosthetic Records this death metal monolith is one not to be missed. After one of 2019s best demo’s Sentient Autolysis, Lesions Of A Different Kind had a lot to live up-to. Within two tracks of this putrid pile of rancid flesh you know you’ve got a hit on your hands. This young band have smashed it to absolute pieces, even managing to bag a guest spot from The Black Dahlia Murder’s Trevor Strnad on the title track. This is ten tracks of death metal that’s full of character, full of monstrous riffs and vocals that sound like they crawled straight out of a sewage contaminated river. They’re guttural and covered in slime, but just clear enough for you to know every lyric being spewed…lovely stuff!

New York City’s black metal wizards Krallice surprised us all with this brand new album. It just came out of nowhere, but damn am I happy it did. By far and above the best black metal release of the year for me. This band just blows my mind every time I listen to them and Mass Cathexis is no different. If you’re not familiar with the group, it would be hard to describe their sound as its very complex, dissonant and twisted. All four members are extremely proficient with their instruments and are excellent song writers. Mass Cathexis is excellently produced by Krallice member and incredible producer Colin Marston (Note – Colin also released an excellent solo black metal album under the moniker Xazraug titled ‘Unsympathetic Empyrean’). The music is forensically composed yet bludgeoning black metal and is something you need to check out!

Fetid slime covered death doom out of Florida, Worm’s Gloomlord is a murky, dank and dense affair that’s so heavy it’ll knock your speakers from their stands. Released via Iron Bonehead earlier this year, it’s also one of those albums with artwork that just perfectly matches the mood… just perfect. The additional harmonies brought by Worm give this record an almost 80s splatter movie soundtrack feel, if the movie was set in the Everglades and the protagonist was a slime covered swamp mutant. If that doesn’t sell it to you then I don’t know what will. This was one of my favourite, if not my favourite, death doom records of the year. Look out for a brand new release from these guys in the near future after signing with 20 Buck Spin, congrats!

Dug straight out of the deepest depth’s of the corpse pit in Illinois, USA Molder have numerous splits, demo’s and live records to their name but 2020 was when they graced us with their debut full-length Vanished Cadavers. Without a doubt it’s the most fun I’ve had with a death metal record all year. This thing is killer in all of the best ways. Full of infectious and bouncing riffs it’s impossible not to bounce around the room with it. The Obituary esque vocals plastered over the rotting gore influenced death metal is just perfect. Tracks like Incipient Disease will be on my play lists for years to come, I need to see these guys live. As a final selling point, tracks titles like Granulated Chunks make it impossible not to fall in love with this record. Oh yeah, to top it all off the bonus track is a killer cover of death metal legends Asphyx’s Serenade In Lead.

Australia’s grind monsters Internal Rot have, without a doubt, released the grind record of the year in Grieving Birth. This record is as relentless as it is ugly, it’s a perfect soundtrack for 2020. Reminiscent of grind legends Insect Warfare, this is grindcore as it’s intended to be, twenty two tracks in twenty three minutes, no breaks, no samples, no stop gaps, just pure unadulterated aggression. With riff after riff after riff, this will have you tearing your home to pieces and loving every second of it. It’s hard to pick a favourite track as there all of equal brilliance. I’ll stake my claim here and say that this one will be being brought up for years to come in discussions about killer grind albums everyone needs to own.

There’s a general rule of thumb when it comes to death metal being released over the past few years, if it’s released by Maggot Stomp… it’s going to be gold and this filthy old slab of death metal is no exception. Ripped straight out the stomach of Portland, Oregon, Disembowel have blessed us with another staggeringly good debut record, 2020 the year of the debuts? Not only is the artwork on here killer, courtesy of Karina Monzon, it also sounds excellent. It has a really heavy production but with a purposefully dirty edge. The main reason this has charted so high for me, and I imagine will for others, is how solid it is. For a debut record to be this consistent is really impressive, so hats of Disembowel – you nailed it! Can’t wait to hear what’s next.

The top three, well done for getting this far readers! For number three we travel to the beautiful city Rome, Italy which is home to Bedsore, who released Hypnagogic Hallucinations via 20 Buck Spin. Another debut! Can you believe it, this is one of the most incredible listens I’ve had all year and one that I’m consistently going back to again and again. This is progressive death metal at its very finest. Not only is this great death metal, it’s also an absolute trip with heaps of psychedelia thrown in to twist and bend my poor feeble mind. With sounds reminiscent of Human era Death, Morbus Chron and Blood Incantation, this thing just sounds incredible, one of the most memorable sounding records all year. Congrats to the production team who have absolutely killed it. The instrumental passages featuring a plethora of different sounds combine really cohesively with the well written death metal that has that old school theme, but churned up into something new…this is a must listen.

2. Ulcerate ‘Stare Into Death And Be Still’

Another entry from the South Pacific, this time New Zealand and one of the most consistent and forward thinking groups in modern extreme music…of course it’s Ulcerate and their latest monumentally heavy effort Stare Into Death And Be Still. Eight tracks of technical mastery that sounds incredible, the metallic production accentuates the intricate harmonies that weave around the entire record. The sound is dissonant and ever evolving almost like its alive. This is a piece of art. I still haven’t taken this off rotation and this came out back in April. It just hasn’t got old. The drums on this thing are just insane, an incredible performance from Jamie Saint Merat that you need to hear.

So hear it is folks…Number One, my favourite record of 2020! I’m going to go as far as saying one of my favourite albums of recent years, courtesy of Swedish progressive death metal masters Sweven and their, sort of, debut record The Eternal Resonance released via Ván Records. I say sort of debut because Sweven is from the mastermind Robert Andersson of Morbus Chron, who sadly split back in 2015, and The Eternal Resonance feels like a natural progression from those years. If you want to hear a perfectly produced album, this is it. Everything sounds perfectly balanced and clear, which really fits with the natural sound Sweven deliver.

This isn’t your standard progressive death metal record, with spatters of jazz, post rock, Gregorian chants and 70s progressive rock all being used expertly. Never too much, just a spatter of variation that hooks the listener in and refuses to let go. The guitar work on here is sensational and, combined with the wonderful production, it’s impossible not to fall in love with the emotive riffs and licks. The clever drum work next to those guitars are taken to even higher levels with Robert’s gravelly and tortured voice, which just light up the melodies on offer. Even when they are softer, it still sounds right.

From first listen, this record blew me away and continues to do so every time. It sounds utterly effortless considering it’s such a intelligent composition. Sweven has a lower tempo than Morbus Chron but patience is a virtue and pays off big time with this one.

Some of these records could easily have made my top ten. It was incredibly hard to put together my list with the sheer amount of tremendous music out there, so please check out these as well. If you’re anything like me you won’t be disappointed. Anyway thanks for reading, thanks for celebrating the thing we all so love dearly and here’s to another sensational year of music in 2021. 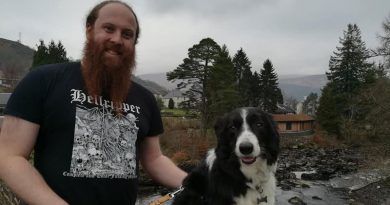