It’s kind of preposterous that of all of the dedicated writers here at the Sleeping Shaman that I should be one of the ones to attempt to round up the year in heavy music on its behalf. For starters, I am one of the new kids on the block, having only joined the writing staff here in June and even I would have to admit that I’ve not been the most prolific of writers (as the Sleeping Shaman himself will no doubt attest.) But as a critic, a fan, and a member of an active band I think I’ve seen this year’s releases and events from a variety of angles, so I’ll try to summarise the year in a well-rounded and “Universal” way. As an added disclaimer, I should mention that my ‘area’ is doom, stoner and sludge so apologies in advance if your musical preferences or favourite bands get severely over-looked.

However, I think most of you will agree that it’s been an excellent year for alternative music. There have been new releases from bands like Earth, Electric Wizard, Boris, Ramesses, Weedeater, Wolves in the Throne Room, Rwake, Yob, Mastodon, 40 Watt Sun, Thou, Atlas Moth, Cave In, Cannabis Corpse, Sourvein, Sepultura, Machine Head, Premonition 13, Chelsea Wolfe, Orange Goblin, All Pigs Must Die, Hank Williams III, Primus, Anthrax, and even reunited nu-metal arse-clowns Limp Bizkit. Best of all, Lou Reed and Metallica inexplicably teamed-up to release one of the most talked-about [translation: derided] albums of the year and James Hetfield surely won “The-most-preposterously-earnest-vocal-delivery-of-a-preposterous-lyric” award for “I am the table!” As a life-long Lou Reed fan I at least got a small amount of joy out of the sheer ridiculousness of it all although it seems that a few Metallica fans now want Reed dead. At this point I don’t think either artist can sully the other’s career…

On the other hand it’s been a great year for up-and-coming bands such as Conan, Sigiriya, Slabdragger, Serpent Venom, Cultura Tres, Wiht, Wizard’s Beard, Undersmile, Grifter, Dopefight, Dead Existence, Alunah, Pombagira, Dopethrone, Windhand, Desert Storm, Tree of Sores, Five Will Die, Banda de la Muerte, Gurt, Meadows, and Bastard of the Skies who’ve all either gained praise for their recorded material or live performances, or both. Again, apologies to any of the hundreds of excellent new bands I’ve missed – it’s a good sign that there are literally far too many to mention here.

On the live front Download Festival was met with a mixed response, while Damnation, Supersonic, and Roadburn 2011 went down extremely well. The fact that next year’s Roadburn Festival sold out in seven minutes is a testament to the strength of the frankly ridiculous line-up which includes (the reformed) The Obsessed, Sleep, Yob, diSEMBOWELMENT, curators Voivod plus far too many other excellent bands to even begin listing. In short, it’s going to be fucking ace and it sucks to be you if you’re not there.

In other news, stoner-legends Kyuss returned to the live circuit (albeit under the probably legally-imposed name Kyuss Lives! and minus original guitarist Josh Homme). On the 11th of the 11th (possibly at 11.11am) heavy metal doom kings Black Sabbath announced that the original line-up was to reform to headline Download Festival 2012, to undergo a world tour and to record a new album. Whether this means we’ll get some classic Black Sabbath/Paranoid/Master of Reality/Vol. 4-era riffage or Never Say Die! era rock n’ roll drivel remains to be seen. Fingers crossed that it won’t suck a huge fat one.

Finally The Sleeping Shaman itself has gone from strength to strength, particularly since it got a revamp in July, and now has more visitors than ever thanks to you lot and an ever-expanding group of writers and music enthusiasts spreading the word. As well as new reviews appearing on the site almost every day, there have been more news stories being reported, and exclusive streams of albums by the likes of Paul Catten (Lazarus Blackstar, The Sontaran Experiment) with plenty more where that came from in the New Year. Everyone at The Sleeping Shaman would like to thank you for reading and sharing the site and allowing it to expand into a one-stop shop for all of your metal, doom, sludge and general alternative music needs. Don’t forget that you can show some Sleeping Shaman love by purchasing a Sleeping Shaman exclusive t-shirt – you know you want to stuff one in your loved-one’s stocking. Get them here!

So until the world comes to an end (possibly during Bongripper’s Satan-Worshipping Doom Roadburn set), here’s to 2012 kicking as much arse as 2011 did. 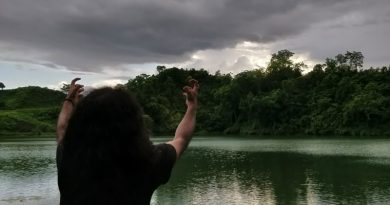