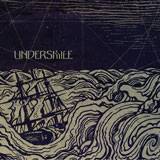 Since their formation in 2009, Oxfordshire’s Undersmile have garnered a fair bit of attention thanks to numerous live shows and two previous releases; the ‘A Sea of Dead Snakes’ EP, and a split EP with Hampshire’s ‘Caretaker’. May sees the release of ‘Narwhal’ – Undersmile’s first full-length. At well over an hour in running time, ‘Narwhal’ is a deep and dark monstrosity of an album that is at times disorienting in its intensity, and almost feels a bit like being lost in the corpse of a huge whale… or Narwhal.

Co-produced and mixed by Jimmy Hetherington (also responsible for the production on ‘Sea of Dead Snakes’), and mastered by Billy Anderson – the legendary sonic guru behind some of the best heavy records of the last twenty years, from Sleep’s seminal ‘Dopesmoker’ to the lesser-known but equally crushing Diet Pills LP – it comes as no surprise that this is a seriously heavy record. Big riffs and corrosive guitar tone are in abundance here for sure, but there’s much more to it than that.

The band’s first two releases weren’t by any means run-of-the-mill, definitely striking at something different with the mix of heavy doom and that bleak and eerie brand of psychedelia, but the first thing that struck me about ‘Narwhal’ is the sense of brutality; there is a really visceral, almost anti-music tendency in some of these songs. The deliberate gaps and sudden dynamic shifts, the chopped up structures, the weird seasick lead guitar lines all put this material out of simple nod-able stoner doom territory. The bludgeoning repetition of monolithic riffs, the frills-free solid drumming, and the whole approach to the vocals is all totally reminiscent of ‘Cop’ era Swans. But to say Undersmile are just like a doom version of early Swans would fall pretty far from the mark – there’s everything from Melvins chugging to Today Is the Day style dissonance going on here. In the space of one track – ‘Myra’ – I hear bits of Khanate, SunnO)))’s ‘Big Church’, and even Taint-esque bass lines under melancholy Earth guitar chords – and that doesn’t even cover it. But in all sincerity, any lengthy list of comparisons would just outline that Undersmile are clearly big music fans, and ultimately overlook the fact that they’ve organically arrived at something original with this record.

Narwhal is basically made up of long heavy tracks interspersed with quieter and shorter haunting ones like ‘Cortege’ and ‘Funayurei’, but that’s not to say it’s fractured or an awkward assemblage of different parts; the whole thing works as an album and should definitely be listened to and treated as one coherent piece. Its length, sheer heaviness, and deliberate intensity might present a challenge for some people, but it’s a really rewarding listen if you persevere, and this is not the sort of music to occupy any middle ground anyway.

By the end of the whole thing, I do feel a bit as if I’ve taken drugs and been quite badly beaten up, but that the experience has been ultimately positive and even a bit therapeutic. ‘Narwhal’ is a huge and cavernous record that takes in a breadth of heavy influences, firmly placing Undersmile as one of the most interesting and exciting contemporary doom acts at the moment. And let me just say that any band that names a song ‘Berk’ is alright by me.