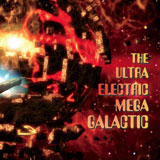 You can’t get a much more hyperbolic name for a band than The Ultra Electric Mega Galactic however; I wouldn’t expect any lesser name from the brainchild of Ed Mundell (Monster Magnet, The Atomic Bitchwax), Collyn McCoy (Trash Titans, Otep) and Rick Ferrante (Sasquatch). It turns out though, that it is a wholly accurate band name too. This is 9 tracks and 55 minutes of far out, cosmic brilliance.

As soon as you put the album on, the atmospheric mix of rumbling bass, guitar effects and back masked cymbals of opening track ‘Unassigned Agent X-27’ makes you feel like you’re being strapped in for a voyage into the furthest reaches of the seventies flavoured psychedelic universe the trio inhabit.

And what a voyage it is.

What every track on this album shares is that they all start with a seemingly simple concept: from the rock and roll opening riff from ‘Exploration team’ to the laid back drum intro of ‘Get Off My World!’ each track builds up as each of the three add ever more intricate touches to their playing. This album is so well put together that it is possible to lose yourself in trying to listen to all those little things in every song that you’d expect from such accomplished musicians: Terrific and imaginative bass runs, fantastic drumming with perfectly timed moments of genuine brilliance, that guitar sound and a whole host of effects that are liberally applied but never overused.

The thing I particularly like is that this is an album that you can take as seriously as you want to. For all the musicianship on show, it’s not a challenging album to listen to at all. With over half of the tracks at around 5 minutes or less, nothing becomes overblown or ever feels self indulgent. Every track on the album is simply a great track, each with a hook that makes your foot or fingers start tapping before you even realise.

The seventies feel to the album is one of the things that ties the album together, but is most evident in the tracks ‘Rockets Aren’t Cheap Enough’ and ‘Hello To Oblivion’. Both have that kind of feel like they wouldn’t be out of place in the soundtrack of a Russ Meyer movie.

‘The Man With A Thousand Names’ is a bit of a standout track, as it trades the distorted, wailing guitars for a cleaner sound that transports you to the mythical Middle East. It perfectly brings together the traditional and contemporary without sacrificing any of either. And although as a track it does stand out, it doesn’t feel like it’s out of place at all.

There are a couple of heavyweights on the album too. ‘The Third Eye’ is a trip in itself that starts out at full throttle, and then slows gradually in velocity over the course of nearly 12 minutes before building the pace again as it climbs towards the final crescendo. As it slowly shifts down the gears, it takes on a more dreamy aspect; a nice relaxed rhythm, wandering bass line and plenty of guitar effects. ‘In The Atmosphere Factory’ closes the album with a wistful, bass led intro to a huge slab of rolling psychedelic soundscape that gently swells and falls like a calm ocean.

I really can’t recommend this album enough. Not only does it do exactly what you expect it to do, it does it amazingly well.