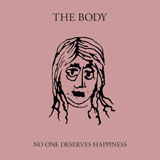 With an ever growing list of side projects and collaborations, it was beginning to look like The Body were never going to get back on track towards their own albums. However, two years after the release of I Shall Die Here, their fifth full length No One Deserves Happiness has come to fruition. It’s safe to say that the duo of Lee Buford and Chip King left the corpse of their former sludge selves by the wayside a long time ago. This record sets out to create, according to them, “the grossest pop album of all time” and the weirdness doesn’t stop there; the cover features a crude and poorly drawn rendering of Full Of Hell’s Spencer Hazard. Another weird, but wonderful, addition to the record is the inclusion of cleanly sung vocals from Chrissy Wolpert (Assembly Of Light Choir) and Maralie Armstrong (Humanbeast).

Opener Wanderlings will part listeners like the red sea – those that experience feelings of intrigue and wonder at what they’re hearing will have a great time with the rest of No One Deserves Happiness. Those plagued with thoughts of “what the fuck is this?” and/or “this is terrible” will want to turn off at this point – it’s not going to get any better for you. 80s synths, dance beats and electronically programmed drums encircle the mystique of the female vocals before being pierced through by the depraved shrieks of Chip. There is a pendulous format of tribal and industrial, best described as ‘avant-garde’ if you want to be pretentious about it.

Starving Deserter is the star of the show on this record, it delivers a perfect blend of brutal ugliness that gives nods to the likes of Godflesh and Neurosis, as it works its way through horrifyingly heavy psyched out guitars and electronic rhythms. This entire album is a display of vitriolic hatred, a portrayal of how worthless life really is, and it’s portrayed in a manner of discordant beauty and horror. The use of clean vocals and the dark looming passages of industrial tinged madness provide startling likenesses to Swans, especially as Wolpert and Armstrong’s vocal often bear a striking resemblance to those of Jarboe.

This is without a doubt The Body’s most jarring release to date, however, this is juxtaposed with the fact that it is also their most creative and interesting. Buford and King are a pairing that are forever pushing the boundaries of what music is. They break all of the rules of composition and their sound expansion doesn’t look set to stop here either. No One Deserves Happiness is an impressive feat and a useful tool for living the experience of shooting up minus the track marks. Pure sonic weirdness at its most horrible and delightful. The Body have successfully portrayed both heads of the beast.