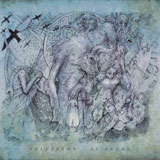 ‘12 Areas’ begins with a calm that belies what is to follow. The short intro, ‘{Hypnos}’, suggests a brooding futuristic nightmare with an ambient soundscape of flickers and glitches. This motif is repeated later in the album. Before that, though, drums come suddenly hammering through the murk to let you know that Telepathy are not going to fuck around.

This is the first full-length from the Colchester (UK) based instrumental math-meets-sludge trio. It has been nearly three years since the ‘Fracture’ EP, during which time the band has made both the UK and Europe rattle with crushing live shows and also released a one track download, ‘Lucretius’, in July 2012. ‘12 Areas’ displays a development in song writing that can best be described as bigger in all possible dimensions.

There are many elements here that remind me ‘They Will Surface’ by US band Hyatari: delicate long-distance guitar melodies, expansive drumming big as mountains, and a crunchy bass to hold the megalithic combinations together. This is much more aggressive, though. There is no doubt Telepathy aim to make you nod, bang or shake your head. No doubt at all that Telepathy are out to create atypical post-metal by emphasising the metal and combining it with abrupt riff and time changes to keep the songs moving toward the final exploding singularity at the end of ‘To Kiss The Ocean Floor’. There are moments when ‘12 Areas’ seems to let up and begin to soar, such as the central section of third track and promo single ‘Cystine Knot’, but these remind you of just how heavy the album is as they come crashing back down.

The band outline in the album’s accompanying press release that the songs are conceptualised around the phenomena of lucid dreaming and “the many sleep states of the human mind involved in the experience”, which is reflected in this rapid change of atmosphere from post-rock ethereality to the gravity of hammering drums beneath a sludge riff.

This concept is most heavily implied in the title of the song ‘Sleepwalker’, a song which for me is a defining highlight of the album: shifting its intensity between valley-heavy riffs and sky scraping guitar lines over insistent drums to create an audial equivalent to the Peak District. It carries an almost euphoric feeling of release.

Telepathy’s first release, ‘Fracture’, offered five individual tracks steeped in progressive sludge and suggested a band that could range anywhere from The Dillinger Escape Plan to Strapping Young Lad. ‘12 Areas’ takes the band to an altogether more unified and idiomatic area, showing a band more familiar with one another and firmly embedded as a single entity. More akin in sound to Yob’s ‘The Illusion Of Motion’ (at least to my ears), though with a more dynamic sound, the full-length album utilises elements of noise and ambience to build a unified album distinctly robed in sludge, but with a sound that sounds fresh and present. This is sludge for 2014.

A lot of credit for this must be given to the production which, even on the promo MP3 quality version of the album that I heard, is meticulously finished. This no doubt has a lot to do with the ubiquitous James Plotkin, who mastered the album, but also does credit to the band’s musicianship. This again shows a step forward from ‘Fracture’: it sounds brighter, bigger, and deeper.

And as great as the album is, their live show continues to stand out as an experience in itself. With the release of ‘12 Areas’ on May 5th, the band will pursue three dates in the UK with fellow Colchester-based instrumentalists Three Thrones and their own full-length tour throughout Europe in September. If you enjoy the album as much as I think you will, Telepathy’s live show is a must.