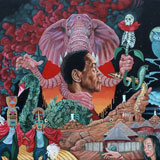 If I’d be wearing a hat, I’d tip mine to Sonny Simmons. Sonny is 82 years old and felt it would be a good idea to get into this whole trippy, doomy, stoner thing with Middle-Eastern vibes. It results in the wonderful journey that is Nomadic, taking you through desert, mystery and courts of the kings of old.

Sonny is a man who has music pumping through is veins, ever since he hit the free jazz scene in the 50’s. He probably is one of the last, but ready to sit back and enjoy what he has left in this world he will not. The man worked with Sonny Rollins and John Coltrane, formed an artist commune at Woodstock and jammed with Jimi Hendrix. He never became a being of the past and was still a high profile jazz musician in the 90’s.

To realize this project he gathered a group around him, named Moksha Samnyasin. This bass-drums-sitar trio consists of French musicians Thomas Bellier (Spindrift, Blaak Heat Shujaa), Sebastien Bismuth (Abrahma) and Michel Kristof (Other matter). The latter already worked with Simmons on a project titled Leaving Knowledge, Wisdom And Brilliance / Chasing The Bird?.

The music is enchanting and almost hypnotic. Like a calm sea of sound, the trio put down the groundwork for the freewheeling alto sax and English horn play of Simmons. There’s something foreboding in the music, almost Lovecraftian mysterious thanks to the Middle-Eastern elements. That’s only song one, titled Help Them Through This World, which is an almost 15 minutes lasting trip. The haunting sounds produced by Sonny Simmons are like mirages in the desert, luring in the weary listener.

We Are Entering The Place Of That is a lot calmer, more meditative of nature. The slow rhythm drifts along, almost gliding, while Simmons plays much more languid. The sounds just float in the hot air, gently until halting play starts to build up tension halfway through the track. The build-up is to a silence, where Simmons speaks of the mysteries of Egypt and the discovery they are making through music.

This discovery continues in I Put It In A Dark Area Where I Don’t Remember No after a long creeping intro, when Simmons soars high above the ground for during this song. As an eagle you witness through squinted eyes, his music carries hope of survival in the dry wasteland. When after a little over seven minutes the drums gently start pounding, the song swells in strength. Simmons goes even more wildly, shooting high and low with his tones.

When It Comes I Don’t Fight It closes the record. It’s the most lively track and feels less spun out. The rhythm is in contrast with the loose play of Simmons, creating a nice atmosphere in which he stands out as the rightful centre of the music. His music thus receives the full attention on this amazing record, where modern meditative heavy meets fifties free-jazz. 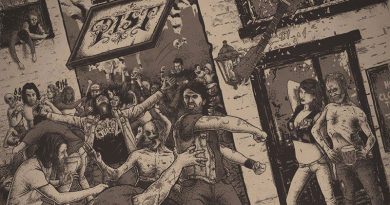