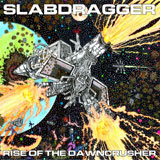 It’s been five long years since the release of London trio Slabdragger’s debut Regress. Aside from a split with Meadows, we’ve not heard anything from them in terms of records, however, they are one of the few underground acts that still manage to draw the crowds and retain long term interest by being consistent in what they deliver within a live setting. Upon first play of second full length Rise Of The Dawncrusher it’s easy to see why it’s taken such a long time, but also proof that good things genuinely do come to those who are prepared to wait.

Tracks such as Erroneous Maximus and Murky Fen have become iconic for Slabdragger because of the sheer force of the sucker punch they deliver to ear drums. Their sophomore effort sees them trade in the short and snappy for longer song lengths. While most bands of the doom persuasion would use a 17 minute song length as a test of bleak, and ultimately boring, endurance for their listeners, Slabdragger use it to showcase their plethora of tone drenched riffs and dirty as fuck basslines all complemented by some serious metronomic percussion work. The band keeps you on your toes throughout with manic tempo changes, frequent shifts in mood and wall-to-wall groove. You genuinely get the impression that the guys are trying to shoehorn in everything they’re capable of as a band, however, rather than it feeling too ‘busy’ or like a disjointed mess, it just works; like a meander through every layer of what makes sludge metal so great in a manner of organised chaos.

Rise Of The Dawncrusher grabs your attention as soon as it kicks in and doesn’t let up until the final seconds fade out. There’s an awful lot going on here, but every song is catchy as heck in its own way. From mountainous chugging riffs to brash and aggressive hardcore brutality, these guys pull it off with ease and style. What’s most impressive of this album, however, is the vocal range brought to the table by both Yusuf and Sam. This is best showcased on Mercenary Blues and Evacuate! – Goatsnake-esque clean vocals bleed into banshee screams and monolithic roars, with the odd Shaman-like chant thrown in for good measure. A genuinely vibrant and attention-grabbing collection of songs that, instead of deviating too far from the tried and tested Slabby formula, just give you more of them to enjoy.