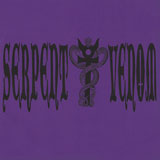 And so as I face my final reckoning and stand before the blackened gates of Hades ready to take my faltering first steps into the fiery eternity of Pandemonium a rumble of thunder shakes the ground and a jagged shard of lightning rends the sky asunder. From out of the darkness I hear a sound, it’s the sound of a guitar playing the soundtrack to my fate and all at once I’m not afraid.

Forgive the hyperbole but when you hear Serpent Venom (formed by members of bands such as Blood Island Raiders and Sloth) you are enveloped by the all encompassing veil of despair that these guys produce. This is DOOOOOOOM!!! Not true doom, or gothic doom or funeral doom or any of those other pointless epithets…this is DOOOOOOOM harking back to the glory days of bands such as Candlemass, Count Raven, Penance, St Vitus, Pentagram, The Obsessed, early Cathedral…etc. Nothing on this three track demo would have sounded out of place on Rise Above’s first and classic “Dark Passages” compilation.

It’s all too easy, and journalistically very lazy to bandy terms like “crushingly heavy” around but sometimes the clichés are the only way. This is like having a mortuary slab dropped on your nuts from a great height. The guitar is rich and full and the bass makes your anus throb as if it’s about to give way. Drummer Paul manages to lay down a propulsive groove on even the slowest sections that lifts this from being a morose plodathon into a mighty fist-fuck of down tuned calamity. Singer Gaz may not have the operatic power of Messiah Marcolin, the psychedelic screech of Eric Wagner or the bluesy howl of Wino but he does possess a powerful set of lungs that somehow sits in the middle of all three and instils each track with enough grit and melody to give Serpent Venom the identity that they will badly need to rise them above the pack of doom pretenders out there.

As with all the doom greats Serpent Venom understand that the true power doesn’t exist in playing at a snails pace alone. Although there is plenty of monolithic riffing and crawling rhythms to keep any suicide case happy, these guys know exactly the right moment when to lift the pace and bust out some fine Sabbath style boogie and lifting the oppressive mood.

This is possibly the doom release of 2010 so far…and I suspect will only be superceded if and when these guys do an album. If you’re disappointed with Cathedral’s current attempts to sound like a heavy metal Van Der Graf Generator then seek the Serpent Venom and ye shall find salvation. In fact if Lee Dorrian isn’t kicking down these guys’ front doors with contract in hand then there is no justice in the world.