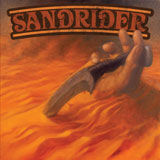 In some parts of the world there must be something in the water that clearly has an effect on it’s inhabitants.

Why else would somewhere like Seattle consistently throw up so many talented and diverse musicians? – from the great Jimi Hendrix, through Bill Frisell (avante garde Jazz), Nirvana, Sir Mix-a-Lot and er, Kenny G. For a place where (according to Tom Hanks in the hideous Rom-Com with the city in its title) it rains all the time, the ‘Emerald City’ has had a profound, diverse and lasting influence on alternative culture. Riding (ahem…) on the back of this reputation are Good To Die Records, Dune influenced Sandrider.

This immense sounding trio take their name from the Frank Herbert penned book and coined the name given to someone who has managed to capture and ride one of the gigantic sandworms that live on the planet Arrakis, as a metaphor for the power of the music, they have tamed and brought under their yoke. Heady stuff indeed, but the members of the band all have pedigree in the rock and metal scene of the city and here combine to good effect on their first full length album.

Comprising of seven punchy tracks this album is lean and hungry for attention; opening track ‘Children’ grabs you immediately with its retro cool. This is the post grunge influence of bands like Soundgarden, Mudhoney and Drive Like Jehu but beefed up on steroids and managing to veer wildly between furious pace and mellow alt rock, all topped off with a huge heroic chorus. If you like your rock to be angular, yet rich in flavour this is manna from Heaven.

‘The Corpse’ carries on the Seattle sound theme with nods to some of the city’s other favourite sons, but here they manage to strip it back to a dirtier stoner sound that is all rumbling bass courtesy of Jesse Roberts and stabbing guitars from Jon Weisnewski. The stripped down interplay between the musicians giving off a sense of dynamics that is catchy and effective. That said, this united sense teamwork still allows the individual members to shine – for example, the standout lead work on ‘Crysknife’ or the excellent drumming of Nat Damm on ‘Paper’ which manages to twist their sound to one that echoes the experimentation of (the) Melvins or even sadly departed UK rockers Taint.

This is a theme that continues through the album and ‘The Judge’ shows that they can bring it down and get mellow with the best of them, although to these ears the effect was kind of like listening to High On Fire or The Jesus Lizard play if they had smoked a shit ton of weed and the album closer ‘Scatter’ rounds of with an almost hard edged Jane’s Addiction feel to it.

For all the talk of influences on this album, it shouldn’t be read into as doing Sandrider a disservice, this is a fair individual and powerful album  by a band with a great deal of talent proving that you don’t have to make an album 12 tracks long to give your audience a quality listening experience. Here they have created a simmering, brooding masterpiece that gives way throughout to massive eruptions of oozing fire and fury. Not bad for a debut…