It’s been an odd year all things considered so it was strangely fitting that the Shaman dusted off his cloak and kicked the site back into gear in 2019. They say that tumultuous times make for pretty good records and so we’ll put that to the test here as we give mini-reviews to a selection of albums that were released in the last few months. Let’s gloss right over the whole election debacle in the UK and Trump getting impeached in the US, and turn our eyes and ears to some of the records that we didn’t get an opportunity to review in full on the Shaman.

Billed as an ‘anonymous collective’ from the UK, Bull Elephant’s debut self-titled record is a concept album about a ‘slain African elephant that occultist Ahnenerbe SS attempted to bring back from the dead as a new form of battle asset’ before getting intercepted by a witch shaman with her own Lovecraft-ian agenda – seriously. Silly concepts aside, this is an extremely accomplished debut which hints at those anonymous members being seasoned musicians (at least one of them is in the band Monsterworks), combining doom, power metal, thrash, and light proggy flourishes in a way that brings to mind fellow experimentalists Boss Keloid. Recorded with uber doom producer Jaime Gomez Arellano, it goes without saying that Bull Elephant is a beautiful sounding record, and while the band don’t bring anything hugely new to the table, there are plenty of ideas in these songs, which twist and turn and take you on a lumbering journey through the bizarre subject matter.

We always slightly worried about the ol’ Pist lads. Not just because of the extreme damage they seem to be doing to their poor, long-suffering kidneys whenever we’ve seen them out anywhere, but also because their reputation for drunken debauchery threatened to put them in a self-limiting box. Fortunately, their latest record Hailz is their best by far and sees them consciously step away from the party-stoner-doom they’re known for, taking a darker turn both musically and in subject matter. Sure, there are still some straight up head-banging riffs which recall their touring buddies Orange Goblin, but these songs veer left and right, into melodic passages and furious black metal sections (sometimes all in one song, as is the case on album highlight Mind Rotter). On Hailz, guitarist John Nicholson has created some of his most memorable riffs, and singer Dave Rowlands turns in his best ever vocal performances. Hailz is a huge step forward for the Bury boys, so let’s hope they continue on this path.

You won’t remember this, but I LOVED Queen Elephantine’s 2013 record Scarab. I still do, so whenever a new Queen Elephantine album comes out I’m on high alert. 2016’s Kala hit the spot, and Gorgon does too. Opening track Mars re-establishes QE’s unique sound: murky, wiry, hypnotic, otherworldly doom. A shifting collective centred around guitarist and vocalist Indrayudh Shome, Queen Elephantine create atmospheres like no other band in the doom world, thanks in part to the use of the textural drone of the tanpura, and the band’s obvious interest in ancient sacred music. Group vocals on the opening and closing tracks give the uneasy impression of happening upon some incantation to raise the dead, and the guitar parts never fall back on anything stereotypical of the genre which is truly refreshing. You can take all your ‘occult doom’ to the tip – it doesn’t get eerier than Queen Elephantine.

The aptly named Slow should be well known to anyone who likes their doom on the ‘funeral’ end of the spectrum. The Belgian duo have created another mammoth-sized slab of emotional, atmospheric doom with VI – Dantalion, an album which clocks in at 78 minutes over its seven tracks. There’s no doubt that Dantalion is an immaculately crafted and measured album; it’s punishingly heavy, and synthesisers and piano help create a wide-open space for Déhà to spew forth his emotional outpouring, and the results sounds like Perses destroying all in his path. To judge a funeral doom album (by a band named Slow) for being overly long is obviously foolish, but even with the best will in the world the ears get fatigued by the time we get to final track Elégie. Fans of the genre will find a lot to love about Dantalion, but newcomers shouldn’t expect an easy ride.

Trippy Wicked & The Cosmic Children Of The Knight ‘Movin On Singles’

UK Stoner legends Trippy Wicked released their debut album Movin On ten years ago, and to mark the occasion here we have four songs recorded at the same session but never released, collected and put out by up-and-coming stoner label APF Records. Listening to these four songs now, it’s hard to understand how or why they never made the cut because they would have sounded right at home on Movin On. The stand out of the four songs is the opening track Evil which sounds like a lost Electric Wizard classic, fitting as it was recorded in the same studio as Dopethrone. Sure, the production is muddy but it only adds to the band’s bluesy swagger, and even with ten years of growth (both in Trippy Wicked, and their other bands Elephant Tree, Stubb and Groan) these songs show that sometimes it’s ok to stick to doing the essentials well. 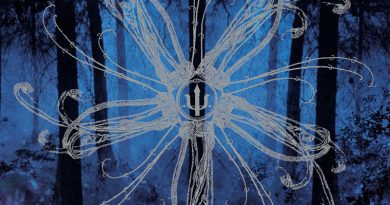