A short and sweet joint effort here from two guitarists who both operate in the instrumental realm. The UK’s Jon Free has a fine discography behind him with the likes of Gin Palace and the late, great Penthouse, in addition to having a solid reputation as a maker of his ‘tin tone’ cigar box guitars, which naturally make an appearance on his contributions, two of which being solo pieces that kick proceedings off.

Two songs, two moods – While You Were Slowly Slipping Away is a lonely sounding little ditty with a hint of Americana style twang, summoning up mental pictures of a desert sunset, or perhaps the closing credits of a surreal western. Similarly filmic and nocturnal, his Stalking Us Through The Wires is darker and more tremolo driven , the mood changing from melancholic reverie to contained menace and introducing a little distortion under the pulsing root note and ominous chords. Neither piece breaks the 3 minute mark, yet both succeed in creating an atmosphere immediately. Great stuff.

Neddal‘s solo contribution here is a longer and more abstract affair, but also operates in a way that conjures up both the wistfulness and threat that Free‘s tunes carry. Salt Of Saturn – With Greedy Looks (I believe it’s two pieces conjoined, though I may be wrong) unravels slowly and takes a slightly more psychedelic bent. Guitars here are less of a twang and take on a more gaseous aspect, descending like clouds beneath synth burbling and acid trip clatter, before building to a clamorous finale where chords jut out from the sonic fog at angles and double in on themselves through effects. It’s slightly nightmarish, and a marked contrast to the more direct playing of Jon Free but it’s just as enjoyable.

If you need some incidental music for your own private apocalypse in these weird pandemic days, this may be the perfect record for you…

Sandwiched between the solo sets however, we get two collaborative pieces which showcase just how well the two’s contrasting styles actually complement each other when combined: Dreaming Of Screaming At You is the highlight for me, a wonderful few moments of the ethereal and the anxious playing off each other – one guitar leading with a recognisable chord sequence while the other reverberates and layers in the background. Beautiful stuff. Pan’s Thigh (Emerald) explores the combination in more depth, being a dronier and darker affair, perhaps a little more apocalyptic in feel, without reducing itself to pointless noise or chaos. But it’s a tense and dark piece.

Either of the pair’s work alone would be a fine way to spend your time, or money if solo guitar is your bag, or perhaps if the soundtrack work of people like Nick Cave & Warren Ellis or even Neil Young’s Dead Man appeals to you. It’s not fair to call this ambient music – it’s gutsier and a little more ragged than that, and more importantly a great deal less self-indulgent than that tag might suggest. Indeed the strength of both players is their understanding of when to rein it in, as well as when to build layers. If you need some incidental music for your own private apocalypse in these weird pandemic days, this may be the perfect record for you. 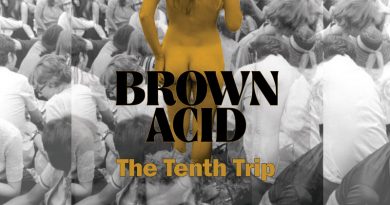