Feedback, when a guitar and amplifier are feeding each other so as to create noise spontaneously is a weird beast. For something supposedly unwanted and harsh, in the right hands, ‘musical’ (and I use that term broadly) use of feedback can be a great scene setter, for instance there’s a track Bliss by the band Palehorse that’s literally just four minutes of feedback at the top of the album. Other times it can be so high pitched and harsh it’s what most people would consider unusable, and go to great lengths to suppress it because, it’s actually genuinely nasty to listen to.

It’s this sort of feedback that Eye Flys hit you with when you play opening track Tubba Lard. It’s only about a second, (they’re not padding out a track for a lack of ideas, unlike… certain intros) but it’s so horrible sounding that it immediately gives the impression that this album is not supposed to be a pleasant listen, either from the great free jazz tradition that’s inspired noise rockers before them, or maybe just to mess with people. I’m not sure it’s mutually exclusive, if I’m honest. It’s definitely a nasty surprise if you’re listening loud and on headphones. It’s also definitely still a great scene setter.

Melvinsesque sludgy hardcore riffs come crashing in straight away, with the little catches, slides and bends that make music fun to listen to. These underpin confessional lyrics, with anger fuelled delivery and discordant harmony lines and solos, it sounds huge, even as the track slides into a voltage starved fuzzed out harsh noise coda. Tub Of Lard definitely lives up to its noise rock billing.

Guillotine conjures more Melvins vibes, as the stark drum intro invokes Stoner Witch opener Skweetis, and there’s something of Helmet and King For A Day era Faith No More about it, while the stark heaviness recalls an upbeat Unsane while a discordance underpins it all. Even then, it’s not all harshness; there’s a solid groove even in the off kilter passages as the odd time signatures sound natural and unforced, rather than contrived and show off-y. There’s even riffs that would sound a bit cheesy in the wrong hands, but in the right hands, and the right context alongside all the wonky noise, they’re sheer nostalgic 90s joy.

It’s at this point we should think about whose hands these ‘right’ ones are. It’s always going to be a double edged sword, advertising a band based on what other bands (Full Of Hell, Backslider and Triac) the members are in. It’s totally understandable; you want to draw in the existing fan base to give the new act traction, you throw every bit of hype you can at it to get people on board, particularly when you’ve got a name as recognisable as Full Of Hell but this only works if the music lives up to the hype and isn’t overshadowed by their associated bands.

you just like the idea of intelligent, at times tongue in cheek, and above all angry riff based music, get on this as soon as you can…

I’ve lost count of the naff CDs I’ll never listen to again that I picked up at Vinyl Exchange because they have a member of ISIS or something in them. That said, there’s also bands like Old Man Gloom and offshoot, of an offshoot, Zozobra, that I love but I’d never have heard otherwise. No such worry here, I’d like this just as much if this were the first album any of them had released, I think. This falls firmly into the keep pile, or at least it would if it were a physical CD rather than a digital promo, and I weren’t such an abject hoarder.

I think a part of that is not just the touchstones of the 90s acts listed previously that I love so much, but also that the albums chimes with me lyrically. Predator And Prey is a song about the military industrial complex. Not in a glorified way, not exalting heroics and all the rest of the militaristic posturing you would get from, say, Sabaton, but taking a look at a narrative of how the military can prey on young, poor people, sending them off to die for questionable causes, before leaving the survivors back in a worse position than where they started.

Nice Guy tackles head on, with the same lack of subtlety, the entitlement of men who think they deserve sex because they act a certain way towards women, (which devalues the acts because of the blatant ulterior motive) and it’s a welcome male voice in a culture where women are seen more often than not as imposters, objects of lust or tokens, rather than taken seriously as human beings. Just ask any woman in a band who’s been mistaken for another member’s girlfriend, told they’re really good… for a girl or had dweebs on the Internet accuse them of wearing a band shirt for any reason other than, you know, just liking the band.

Other lyrics deal with bullying (Tubba Lard throws back the insults and slurs singer and guitarist Jake Smith dealt with growing up,), anxiety, alienation and a search for meaning in an otherwise chaotic existence, all delivered with an anger and aggression that never overstep the border into toxicity. The lyrics show a vulnerability, a refusal to people please and a fierceness of intent and principle that is sorely lacking in heavy music.

If you’re one of those tedious ‘keep politics out of music’ types, or even worse, one of those perpetual online bores who accuses everyone that wants to make a point about basic human decency of ‘virtue signalling’, then this album is definitely not for you. If, however, you’re open minded, you have a thing for any of the bands I’ve mentioned over the course of the review (with maybe the exception of  Sabaton), or you just like the idea of intelligent, at times tongue in cheek, and above all angry riff based music, get on this as soon as you can. 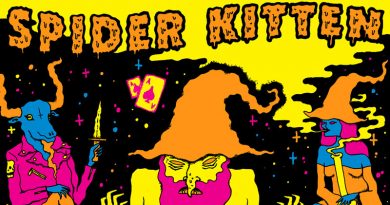