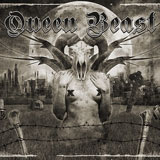 In an age of plagiarists and clones it is often difficult to find something truly original. Queen Beast are here to challenge that perception and give two middle fingers to the notion of playing this extreme music game safely to appease those who believe there are rules that should be religiously followed.

Hailing from Fayetteville, Arkansas, you have to wonder what has been polluting the drinking water. When music journalism often goes for lazy genre pigeonholing, how do you describe something that takes in punk, grind, stoner, ambient and mathcore? I’m even pretty sure the kitchen sink was used as a sample in this 6 track, 60 minute, Ritalin deprived, ADHD inflicted journey through the dark parts of the human psyche.

The album opens with the uncomfortable sample (Last House On The Left?) of a woman being tortured which gives way to one of the sleaziest riffs heard this side of the 1970’s. ‘Her Name Was… Victim’ begins with a stoner vibe that lasts precisely one minute before the track turns on a dime; mutating into a punk/hardcore mauling with gang vocals and call and response death like screams before collapsing into a strangled doom passage coming off like the mentally retarded, bastard offspring of Eyehategod and Dozer… Just as you catch your breath and settle into the ambiance it is off again, all jarring guitar and overdriven fuzz. The track concludes around the ten minute mark incorporating more unpleasant samples and huge riffing, leaving you reeling punch drunk.

By the time ‘Drinking & Driving Down The Lost Highway’ lurches into earshot it almost makes sense. The samples proclaiming, “My punk thing has gone beyond that’ and, ‘We are the filthiest of the filth’ make it clear that the band are determined to push themselves as far as they can go and you either come along for the ride or get the fuck out of their way. If David Lynch had heard Queen Beast in 1997(?) you could guarantee that Trent Reznor wouldn’t have gotten the job for producing the Lost Highway soundtrack – this record is tailor made for exposing the twisted underbelly of the American Dream as it rounds of with a sublime soloing passage.

‘Guinea Pig Asylum’ continues the southern drenched feel, a huge tortured slice of groove that defies you to not nod your head and would probably punch you in the eye for enjoying it too much. This is music to get obnoxiously wasted to, a snarling spit in the face, that wants people to hate it and it’s no surprise when the wheels come off at the end of the track – punk rock viewed through a hippy’s bad acid trip. Trying to hold onto it is like nailing jelly to a wall, although they would probably prefer the more blasphemous imagery of Jesus trying to catch a marble…

‘It’s Okay If You Don’t Like It’ continues in the same vein, mixing chugging passages and blast beats with ambiance before disintegrating into the awesomely titled ‘The Fires Of Judgment Will Cleanse Creation’ which no doubt inspired the apocalyptic artwork. It is an epic, doomy affair, which comes the closest to a straightforward track, essentially meaning it is the least schizophrenic.

The final uncredited track signs off by almost overdosing the listener with samples before turning both barrels on The Misfits, no doubt in homage to their punk rock roots.

What is clear throughout is that for all its jarring and contradictory elements, the performers know what they are doing. Every piece of music is attacked with vigour and executed with precision that keeps it all together without the danger of sounding like The Dillenger Escape Plan falling down a flight of stairs.

Make no mistake, if the line between genius and lunacy is a thin one, then Queen Beast are balancing on it a like a drunken Morris Dancer, this album wants to fuck you but is too busy fighting it’s own reflection. At times utterly preoccupied with making you feel uncomfortable, on first listen it’s like panning for Gold in a creek full of Iron Pyrites but (and whether or not it’s an indication to head for the padded cell) if you can get your head around it there is some precious metal on this disc.