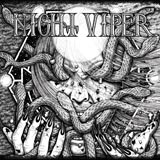 In my book, if you’re going to call your band something as naughty as Night Viper, then you’d better show up with the following kit list already well packed:

1) A truckload of neck-snapping riffs 2) A vocalist that sounds somewhere in the middle of the 4 D’s: Dickinson, Dio, Doro and Dirksneider 3) A song about a strong-willed and/or evil woman 4) A song about a wolf 5) Cover artwork featuring a bunch of angry snakes

Well, we’re at five from five already here in my book and with Brucie Bonus points already secured by leading off this their debut eponymously-titled record with an eponymously-titled song, Night Viper are surely onto a winning formula. That the band are a new entity formed with a foundation of the proven, steel-encrusted fingertips of Tom Sutton (also of Horizont, The Order Of Israfel and ex-Church Of Misery) and the lead-lined pipes of vocalist Sofie Lee Johansson only adds to the feeling that some seriously hot rockin’ is about to occur.

Heading from 0 to a rather riff-ty 60mph with just twelve seconds of calm before the storm to prepare yourself, the likes of Night Viper and The Hammer thunder past like a re-vitalised Judas Priest snapping at the Painkiller’s heels. Sutton and Emil Ridderstolpe’s riffs crunch and cut into each track as a myriad of dazzling solos cackle over the top of Jonna Karlsson’s thrash-happy drums.

Curse Of A Thousand Deaths and Warrior Woman sit back in a doomier pocket, reminiscent of some of Victor Griffin’s staunch fretwork at the helm of the mighty Pentagram or the more-modern, but still ultra-retro, stylistics of the likes of Serpent Venom. You’re never too far from the chug of the thrash metal mania at any one time, particularly on Warrior Woman’s glorious lack of abandon which sounds like Witch Mountain or Hour Of 13 taking a kick up the arse from the steel toecap of the likes of younger upstarts Relentless or Christian Mistress. It’s also got a riff towards the end that’s a dead ringer for AC/DC’s Let There Be Rock sped right up to turbo and a closing chorus line that sounds like “Get pissed! Shake your boots and diiiiiiiie!!” so yeah, what’s not to like?!

There’s a lot of No Life Till Leather or Kill ‘Em All-era Metallica tossed into the Night Viper’s mix, to the point at which you have to pinch yourself that the likes of Run For Cover, Dagger In Hand and Faces In The Mirror aren’t lost Japanese bonus tracks from the original Metal Militia’s early outings. Run For Cover in particular, with its early Kirk Hamster-a-like solo and some gritty, alcohol-fuelled, rhythm-guitar aggression has practically pitched up a tent in Hetfield and Ulrich’s back gardens.

Closing out with the Iron Maiden-meets-Motörhead-meets-Joan Jett fury of The Wolverine, it’s clear that Tom Sutton means what he says with Night Viper’s statement of intent to be “very organic-sounding, to remind people of the heavy metal classics they love, while still being very current and very unique.” Sofie Lee Johansson is a new-found demoness of a vocalist – short, sharp and snarling one minute but able to hold a high, long note with the best of the rest of them at the next, she’s a foreboding weapon in the ‘Viper’s venomous arsenal.

I started off thinking this record was just a bit been-there-heard-it-all-before thrash. But then after a couple more spins I realised: Hey, that’s exactly why I like it! Night Viper sound like they’re down in a damp, leaking basement, a crate of beers in one corner, an eight-track in the other, no air-conditioning – simply rocking out till they drop out. This debut album ultimately sounds like fun, it sounds like raw energy and it sounds like a metal thrashing mad call to arms that no amount of poser rockers could cobble together in eight months of Sundays.

Put simply, if you’re not into metal, then Night Viper are not your friends. Welcome to the party guys, the keg’s in the back room somewhere underneath that mass of denim, greasy hair and bullet belts. 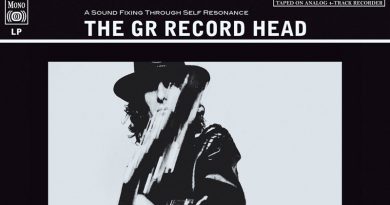