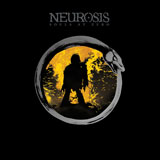 Another year and another boundary breaking landmark to celebrate from Oakland’s darkest sons, this time it’s the almost 20 year anniversary of what is often wrongly viewed as their first album proper, ‘Souls At Zero’.

Taken from a chapter in ‘The Great & Secret Show’ by horror writer Clive Barker, this shiny new version is the second reissue of their third album and fits nicely with the sprucing of the back catalogue that has been slowly happening recently.

Falling somewhere in between the hardcore punk blast of 1990s second album ‘Word As Law’ and the genre busting acclaim of the frankly jaw dropping transformation on 1993’s ‘Enemy of the Sun’, this album can be seen as the first real shift from Scott Kelly and Co towards a sound that would render them kings of a genre of one.

Sound wise it appears not to have been touched by re-mastering which is something of a bonus considering it wasn’t done badly in the first place and retains that warmth and depth often lost in the digital production age and in my opinion sounds all the better for being left alone. If it ain’t broke, don’t fix it right?

Whilst not as revered as the masterpiece that would follow, ‘Souls At Zero’ is no half baked affair either; this was hailed as a genre classic long before Neurosis made so many of them people lost count, yet alone tried to keep a grip on the bands sense of boundaries. No doubt at the time it probably cost the band fans – appearing on Jello Biafra’s Alternative Tentacles label and honing the more metal leanings of their sound it can’t have been what the fans of their crust punk beginnings imagined as ‘To Crawl Under One’s Skin’ slithers out of the speakers awash with garbled samples and feedback; it’s sprawling sonic attack being something new, something alien and something incredibly special.

It is on this album that all the classic elements of this ever shifting band become solid and realised. The folk elements being introduced, the sublime Flight, the almost industrial passages and the execution of the triple vocal attack on the title track and ‘A Chronology For Survival’ showcasing the immense wealth of talent at their disposal and the stripped back understated sections… it is hard to review an album that should be embedded in people’s consciousness as you have to try and avoid telling the obvious, but what can I say? This album is huge…

Huge in impact, huge in legacy, huge in scope, concept and execution… this is not a casual listen of an album, there is no wacky concept to grab hold of, this is a headlong plunge into the darkness of uncharted territory just to see what there is to see and heavy music should still owes a debt. From this vantage point of hindsight tracks like ‘Takeahnase’ and others are a sign post for what would come on ‘Enemy Of The Sun’ and ‘Through Silver In Blood’ right through to ‘Given To The Rising’.

This package with updated and more contemporary artwork (the original drawing of the wicker man cover was a low budget take on the film poster) makes this package extremely easy on the eye like the reissues before it. The track listing on the latest version is the same as the 1999 reissue (completist versions of the ‘Souls’ and ‘Zero’ demos and a drum heavy live version of ‘Cleanse III’) so whilst it probably is far from essential for those who have existing copies, for the uninitiated it is the perfect point to begin an incredible journey.