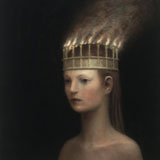 Sometimes a band or a record comes along at precisely the right moment for you, maybe at a point when you’re at a low ebb with a certain kind of sound and beginning to think that you’ve had more than enough of it, and manages to do it so right in a way that just resonates with you so much, crushing the hordes of also-rans and clones firmly under smouldering hoof.

Germany’s Mantar are such a band and Death By Burning is such a record.

It seems like only ten minutes since I was frothing over their self released seven inch and hoping I wouldn’t have to wait too long to hear more and, well, I certainly got what I wished for – and more!

Death By Burning is a crushing, devastatingly impressive statement of intent, a brawny wrecking ball of absolutely rock solid drums, commanding, maniacal vocals and face-meltingly colossal guitar. I guarantee you that you are not gonna hear a more focussed and effectively deployed use of force on anything else this year.

Opening with the Melvins-by-way-of-Motorhead raunch of ‘Spit’ – as heard on their debut seven inch – Death By Burning starts as it means to go on, by smashing your fucking teeth in with diamond-hard vicious ROCK. Make no mistake, Mantar may have aspects of sludge, doom, drone and even black metal within their DNA, but at heart they are basically a colossally nasty rock band. Those Melvins and Motorhead references are pretty much bang on the money – just throw in a little Darkthrone attitude to boot and you have Death By Burning in a nutshell.

The duo – did I forget to mention that there are only two men wrenching these thicker-than-the-earth’s crust tones from guitar and drums? – continue the onslaught with the galloping thwack of ‘Cult Witness’, the HUGE chords and spaciousness of ‘Astral Kannibal’ and the driving Celtic Frostiness of ‘Into The Golden Abyss’ with absolutely no let-up or remorse.

Guitarist/vocalist Hanno wrings every fucking drop of deliciously chewy tone from his one guitar, fuck-knows how many amps and a bunch of judiciously deployed pedals set-up, snarling and spitting throaty venom the whole time as drummer/vocalist Erinc batters those tubs to within an inch of their worthless lives, making even the mighty Des Kensel seem like an underachiever.

The driving ‘Swinging The Eclipse’ gets heads a-banging before lumbering into slower, more open territory, leading into the lurching oddity of ‘The Berserker’s Path’, an off-kilter number with a close-miked spoken vocal that talks of the prowess of theViking Berserkers in an all-too-knowing voice, before giving way to the neck-snapping ‘The Huntsmen’, a track that mixes Matt Pike-esque dirty-ass riffing with icy black metal whirlwind breaks and comes up trumps.

The final leg of the album gets into its swing with ‘The Stoning’, a tight li’l rocker that is probably the most overtly ‘Motorhead’ number on Death By Burning, swiftly followed by the swaggeringly majestic ‘White Nights’, also from the debut seven inch and the subject of the band’s first video, and culminating in the heavy droning desolate behemoth of an instrumental that is ‘March Of The Crows’, a beast of a number that provides the perfect end to the album, like a massive stone door slowly grinding shut.

Death By Burning is all that I had hoped for from Mantar, and more. The two-man-two-instrument format means that any unnecessary flab is jettisoned, and everything is tightly focussed for the entire recording with no self-indulgence – all of the sounds are there to serve the greater whole.  The lack of a bassist does nothing to hinder the thickness of the tone, Hanno has that all in hand with a skilfully applied series of pedals and extra amps, and nothing is missed.

Unlike with some other two piece bands, there are no holes in the music and the duo are skilful and well-drilled enough to be able to avoid sterility of tone – something that other duos are prone to suffer from. There isn’t a note out of place or unwelcome to my ears.

Really, I’m just blown away by Mantar, and by Death By Burning, and deeply impressed by the fact that such an incredibly well-implemented and completely together recording was made by two men who have been playing together less than eighteen months. Actually, ‘impressed’ may not be a strong enough term, if I’m honest.

I’m excited about Mantar, and if you know what’s good for you, you will be too. Go forth and listen to Death By Burning, and if you’re at Roadburn this year I’ll see you down at the front setting myself up for a full-blown Mantar bangover of epic proportions.