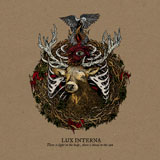 I’m a cynical bastard sometimes; if I’m being completely honest with myself, I probably spent more time in 2013 listening to old favourites and discovering new favourites by older artists than I did listening to new albums actually released in 2013.

It’s easy to fall into this dangerous cycle, but the thing that always stirs me out of this perpetual safe daydream is happening upon something that sounds familiar but which is actually, to my surprise, a new album. When a friend introduced me to Lux Interna I knew I’d found gold, and upon hearing ‘There Is Light In The Body, There Is Blood In The Sun’, I knew I had myself a veritable treasure chest.

When you first listen to ‘There Is Light In The Body…’ you might be tempted to simply compare Lux Interna to the likes of 16 Horsepower and Wovenhand, both of whom are/were fronted by the enigmatic David Eugene Edwards, and there’s no doubt that this comparison is warranted. Lux Interna frontman Joshua Gentzke definitely has an intense vocal delivery which he shares with Edwards, and both bands blend traditional folk with more subversive, or contemporary elements. But where Edwards peppers his pastoral lyrics with religious allusions, Gentzke comes across more like a shaman, writing pagan hymns designed for worshipping at the altar of Mother Nature; where Edwards gives his music an earth shattering gravity thanks to some use of biblical language, Gentzke tends to summon a power from dark pastoral imagery. In ‘Wounded Stag’ Gentzke manages to weave the two worlds together, singing about olive branches “encrusted with souls,” singing with Lazarus, and asking some unnamed force to “take my torn flesh as your dress,” and the overall effect is compelling.

Musically Lux Interna employ a particularly rich palette of sounds, and the production is densely layered with guitars, banjos, drums and percussion to the point that repeated listens reveal new melodic and rhythmic elements. The aforementioned ‘Wounded Stag’ starts at a brisk pace and swells as vocal harmonies and electric guitars weave in to the mix before the song collapses under its own weight into a lengthy half-time outro – one of the album’s many highlights. Elsewhere the smoky gothic drone of ‘Nida’ invokes pastoral-era Earth, as does the distorted, tantric closing track ‘Tabor’. In the slow-burning penultimate track ‘Blackbird’, Kathryn Gentzke takes over on lead vocal duties, sounding like a forlorn Bilinda Butcher fronting a chamber quartet, suggesting a slowcore/shoegaze influence previously hinted at in the lead guitar parts on some of the earlier tracks. But some of the strongest moments on ‘There Is Light In The Body…’ occur when the band attempt something more uptempo and rollicking, such as ‘Tongues’ and ‘Seed’.

I won’t say that Lux Interna are entirely original – they certainly wear their influences on their sleeves – but they are far more than the sum of their parts. There have been other pioneers and trailblazers in this field of pagan, apocalyptic folk, but nonetheless Gentzke is an omniscient, commanding presence on ‘There Is Light In The Body…’ and Lux Interna’s blend of new and old ideas is uniquely theirs. This is an album that deserves repeated listens to fully work its way into the nervous system, for the layers of melody to weave their way into your subconscious and for the imagery to really strike you. Ironically, in a year in which I’ve resolved to listen to more current music, my favourite album of 2014 so far was released last year.