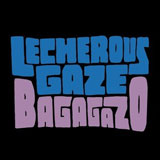 Some bands just capture a spirit in their name; The Sex Pistols, Guns N Roses, Metallica, Slayer…etc. The name speaks volumes and lets you know exactly what that band is about and now you can add Lecherous Gaze to that list. The name has that creepy, voyeuristic, slightly rapey quality to it that perfectly accompanies their ragged brand of kick ass rock and roll. If this band had a smell it would be of a teenage boy’s room…musty and faintly unpleasant!!!

Lecherous Gaze are a denim clad hairy five piece with sweat, sex, drugs and cranked amplification on their fevered minds. The result, captured perfectly on this slab of wax on the increasingly excellent Who Can You Trust Records from Germany, is a sleazy slab of punked up, psychedelic tinged rock and roll that brings to mind acts such as MC5, Black Flag, early Alice Cooper, Kiss, Ted Nugent, The Stooges, Blue Oyster Cult, The Sex Pistols…etc. The three tracks the band offer up here, “Bagagazo”, “Scorpion” and “Feathered Fish” are packed, wall to wall with biting acerbic riffs, post Chuck Berry lead fills, caffeine fuelled drumming and sneering raw vocals that spit pure rock and roll blood with enough piss and vinegar to make you forget that dour, over earnest shit like Coldplay and Muse ever existed.

This kind of rock and roll is fast and to the point so on this record you don’t get much, but it’s enough to get you hooked. Lecherous Gaze are filthy drug dealers, giving you a taste of their wares so that you’re compelled to return, wide eyed and sweating looking for more. Fortunately TeePee records have seen fit to give these guys a chance to put out a full length any time now so stick this in your veins for the minute, let the rush hit you then beg, steal or borrow to get some more.