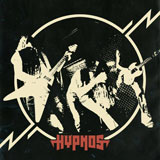 (Puts on Arnie voice) ‘Come with me if you want to rock’.

Jump into the DeLorean, strap yourself in, wind it up to 88mph and get the Flux Capacitor revving up to it’s full 1.21 gigawatts of power because we’re going back to undo the travesties of the past 20 years.

Describing themselves as ‘Heavy Action Boogie Rock’, Göteborg 5 piece Hypnos are relative new comers to the scene but have caught fire in their native homeland and after a handful of shows managed to bag a record deal with Crusher Records. They hark back to what the misty eyed may describe as the golden era of Heavy Metal, the late 70s/Early 80s. In their world Thrash, NuMetal, Metalcore and certain Djent weren’t even words that people would attempt to weld onto a musical description.

Not to be confused with the now defunct Czech Death Metal band of the same name, these guys are at home with Denim and Leather, long hair and flared jeans and have been heavily influenced by the first NWOBHM, particularly bands like Judas Priest and Iron Maiden.

Their Self-Titled debut is actually a joy to listen to at times; it is like pulling out a dusty piece of vinyl you had forgotten and cranking it up. The sound is genuinely warm and in keeping with the feel of the music. The guitars buzz like Martin Birch himself was sat behind the desk and the sharp crunch that would become the de rigour production for hard edged bands is a thing of the future, like rapping or breakdowns, here the music has a closer spirit to the hard rock boogie that is associated with Sad Wings Of Destiny or Maiden’s eponymous release.

Over the course of the eight tracks on offer they give us a high octane work out that puts its head down and goes for it, coming up to breathe in the middle and then charging for the finish line. Hands Of Evil matches the description perfectly, it is full on heavy, boogie laced rock n roll with bombastic lyrics and impressive vocal acrobatics from singer Philip that the Metal God himself wishes he could hit in 2014.

The title track has a laid back feel to it but in essence is as direct as the opener, you certainly can’t fault the enthusiasm as the dual guitars battle with each other on solos and perform the type of signature twin lead harmony partnership that Thin Lizzy would be proud of and the drums thunder beneath them like the heartbeat of someone caught breaking the law.

However, it is not all just a facsimile of bands gone before as on the semi ballad Nightmares, Hypnos create a real atmosphere with an expansive and progressive track that builds from subtle beginnings to a powerhouse of a number that ends with full on rock n roll, fist in the air type bravado. Here Philip channels the blues and sounds like The Door’s frontman as he transitioned from fresh faced singer into hoary blues poet. The lyrics do give the game away slightly as the band ask the question ‘Am I Evil?‘ which raised a smile on hearing but there is no denying that the band struck gold on this track.

Moving Too Fast is back to the speed rush of post punk era metal with a big chorus to accent the urgent tempo and lead single The Mountain is hugely anthemic and features the lead singer taking a break from stratospheric and adding a flute accompaniment. Remaining tracks Invaders, Abracassus and closing track How To Handle Madness all feature the same themes, a funky almost galloping bassline, powerful frenetic drumming, melodic yet groovy guitars and of course the gravity defying vocals. The second half of the album rocks along with as much conviction as the first, delivered with an irony free celebration of all that is good with this type of music and for that you cannot criticise them for doing what they love. However if I am being honest at this point it could be more memorable and varied, but there is plenty for the listener to get their teeth into if they’re paying attention.

No matter what I say, it would seem that Hypnos are growing in popularity, certainly in their homeland of Sweden as their label had enough faith to reward them with a deal and an album in the first year of their existence, and they are very good at what they do. If you think the idea of Hi-Tops, baggy jeans, turntables and ear gauges have no place in heavy guitar based rock you will find a kindred spirit here. This album is like a step back in time stylistically as the band have seen no need to pollute the formula with any updates or fresh takes on the style and that, for me, is the problem with it.

Hypnos is solidly executed, all the protagonists play their parts well and with panache, in particularly vocalist Philip who is a very accomplished singer with a great range and they pen an enjoyable tune. The problem is that once this album gets stacked on the shelf (or lost in the iTunes library), you are asking it to go toe to toe with some of the classics of heavy metal, not just snap shots of a period in time, some of the greatest hard rock albums of all time… Given the choice are you going to throw on Hypnos or are you going to play British Steel?

Of course that is an extremely unfair position to place a band in, and again Hypnos are barely taking flight as a band. They have the skills and if they can strive to strike more of their own identity, then they can break out of the niche they have cornered themselves. If they slavishly continue following the formula they are likely to end up more Praying Mantis than Iron Maiden. 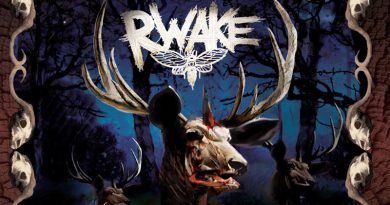