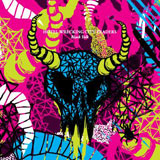 The name Hotel Wrecking City Traders (or HWCT to make life a lot easier) has been bandied around for a while now but as they come from way down under in Australia their music may be less familiar to most of you. The obvious Antipodean reference points such as AC/DC and Rose Tattoo certainly don’t apply here, there’s not a sniff of the heads down, beer drinking bar room boogie that you might normally associate with Aussie bands. HWCT walk a confused path that takes in stoner, doom, psychedelia and post rock in various measures.

Australia must be a hard place to find musicians as HWCT are yet another in an increasingly long list of bands that have done away with the idea of bass and vocals to operate as a guitar and drum instrumental two piece. As with most bands of this nature some of it works and some of it doesn’t.

For two guys HWCT make an impressively big sound, largely thanks to the thick and very live sounding production that gives the drums real weight and the guitars real depth and clarity. The musicianship on offer is also of a very high standard which helps to carry the band’s format forward but is this enough to sustain this LP over the span of its six tracks?

Opening track “Cup Weekend Murders” starts strongly with a stop/start riff that would keep most post hardcore fans happy whilst kicking out enough beef for the stoners. The next track “The Lakeshore Strangler” treads more familiar stoner rock territory with its big lolloping groove and avalanche of a guitar line which leads us into the third tune “Hanging Rope”. This is where HWCT temper their sagging weight with a more restrained nod to psychedelic drone.

After what seems like a pretty strong opening gambit things don’t fare quite so well for the remainder of the album. It’s not that “Eavesdropper”, “Rolling Implements” and “Pagoda” are bad tracks, in many ways they’re the equal of the opening three tracks, the problem lies in the overall impact of the band. I have often questioned whether an instrumental two piece band can sustain the listener’s interest over a whole album and HWCT help to answer that question with “not really”. Although HWCT aren’t lacking in depth sonically they do lack some depth in terms of composition. The extra elements that bass and vocals give a band that are missing here show some limitations with the format. In fact many of these tracks have an almost improvised feel. Perhaps the band have taken some influence from the improvisational Daggers Mid Flight project they recorded with fellow Australians Spider Goat Canyon when putting this record together. Most of the songs here feel like they have been jammed out at practice and without a firmer hand to reign in the structures they seem over long and unfocussed. Six songs over a whole album would test most people in a conventional band format but here I found my attention wandering past the halfway mark each time I listened to this release which is a shame as HWCT do have some very interesting musical ideas on show here.

I would still urge people to check the band out though, have a spin on Myspace and see what you think. Perhaps in a darkened room with some serious weed infusing your soul this album may take on a different perspective and perhaps that’s where I missed the point.