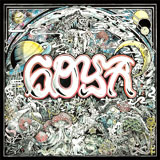 You know that moment when you’re trying to type in some web address pertaining to be a band but you can’t remember the exact wording? Was it the band’s name with ‘metal‘ or ‘doom‘ attached or some other often used form of Facebook page titling? You have to Google to find out. Well, Goya took it upon themselves to put a stop to this menace. There is no Goya bandcamp – there is only marijuana.bandcamp.com. Let it be clear for everybody that Goya one-upped Sleep here in a very distinctive yet subtle way.

Hailing from Arizona, Jeff Owens (axe, battlecries) Jirix-Mie Paz (low axe) and Shane Taylor (hammers) have been clear about their influences from the start – it is all about Sleepy Electric Wizards on the Sabbath with these three. “Forever dead, forever stoned!” proclaims Jeff in ‘Night Creeps’, and although it is not an entirely happy prospect we are inclined to follow Goya into, its finely crafted abyss, filled to the void with the sort of minor-key riffing, pounding drumming and doomed singing you’d expect from a bunch of stoned Iommi-fanatics from Arizona.

It is surprising to hear that not just the sounds, but the vibes of their trinity of forebears have mixed into one acidic puddle. The songs often have the epic plodding drive of Sleep, with a minor-key tonality that instantly reminds of the Wizard, while the intro was infused with the kind of proto-metal blues riff Sabbath championed. As Jeff said in an excellent interview with the Sludgelord, the biggest worry is not to sound too much like their influences. By mixing the vibes of their forebears, Goya managed to solve this problem.

Another reason Goya succeeds not to sound too much like their founding fathers is the excellent song writing, so often absent from the stoner and doom worlds. The riffs are superb (in fact, any Wizard fan waiting for the new album should be directed to marijuana.bandcamp.com immediately), but the way they are organised lends them their real power, a fact demonstrated by songs like ‘Necromancy‘ and the beyond-catchy ‘Blackfire‘. The latter is the best attempt at continuing Electric Wizard’s ‘Dunwich‘ this reviewer has yet heard, owing its catchiness as much to the riffs as to the groove Shane Taylor hammers down expertly.

Of special note are the solos. As an adjective, the term ‘mind-melting‘ is sorely overused, but this reviewer is confident that anybody who hears these solos will concur that Jeff comes as close to executing the effect as an axe-slinger would want to get on a debut-full length. Listening to ‘Night Creeps‘ first minute will drive the point home. Gratuitous overdubbing and wah-use are only partly to blame for this, the boldness of these sounds resulting mainly from Jeff’s complete lack of care for our ears. In fact, his lashing acidic tones are meant to utterly dissolve your hearing. Whereas the average guitarist would follow the scales down the neck, bending a few notes on every successive fret and ending on the customary two-fingered high screech near the pickups, Jeff just wants to slash your face off right away. This is very, very refreshing and makes every solo a joy to hear.

Speaking of overdubbing, the production warrants a tip of the shamanic cowl. Recorded live, there’s an urgency to the playing that is perfectly complimented by the sound. From the thump of the kick to the grind of the bass to the aforementioned solos, the sound coagulates into a pounding acidic minor-key menace the likes of which few debuts can display.

Goya have managed to craft a victorious debut that manages to pay tribute to its founding fathers as much as it manages to stand on its own feet. Influenced but not overly informed by their forebears and aided by a pounding live sound, ‘777’ will make a great addition to any household that celebrates the Iommic. Will they continue on this path of well-written songs or will they focus on jamming and walls of sound next? One thing’s for sure: this is marijuana doom the way it was meant to be made. Doomed from womb to tomb, this reviewer is aching to hear the next effort.