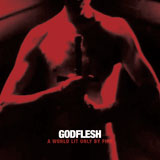 It literally seems like a life time ago that I was a first day buyer for Godflesh‘s last appearance, the seminal 2001 album Hymns. Back then the world was in the grips of Nu Metal and whilst an album by the legendary talents of the Justin K Broadrick and GC Green was an important event in itself, the fact is that back then Godflesh albums happened… This was something a lot of people including myself seemed to take for granted and despite getting back to their ground breaking best, Green departed the band shortly after Hymns was released and personal issues caused Broadrick to call time on a band that helped shape and define the very foundations of industrial music itself.

As time drifted painfully onwards without the band, the industrial genre has faded and suffered there can be no doubt, with only a few artists capturing the heights of aggression and despair reached on the likes of Streetcleaner and Songs Of Love & Hate. Broadrick himself recovered enough to re-emerge with a new project, the more post-rock, shoe gaze orientated Jesu, a master class in experimental dense, layered and droning soundscapes that flirted with electronica and melodic prog. As powerful and as beautiful as the project was, listening to Jesu was more a kin to being in a submersion tank studying glacial movements, rather than the merciless, paranoid anxiety that permeated Godflesh‘s best work.

Following a reunion in 2010 and some spectacular live dates for the likes of Hellfest and Roadburn (twice – performing Streetcleaner and Pure in their entirety) Broadrick confirmed they were making new music and June of this year saw the release of four track EP Decline & Fall; a short and brutal reminder that no one should forget the impact of Godflesh when they are at full tilt and for those anticipating a full length release, they still know how to kill the old way.

So to A World Lit Only By Fire (hands down my favourite title of the year), like all classic bands that have had reunions in recent times, there is a sense of trepidation that this could turn out to be a turd rolled in glitter; but after the ominously atmospheric start New Dark Ages crashes in with that familiar dense pounding and grimy sounding guitar which slowly builds to seismic proportions until it explodes with Broadrick’s scraped raw bark.

What is striking is that the track appears to travel very little distance at first, but repeated listens will reveal that with each squeal of harsh feedback the subtle shifting drum patterns and guitar riffs that give way to keeping melody are as experimental as anything that they have produced before. Jesu might have taken 20 minutes to explore a concept, here Godflesh twist and turn, often in a blink of the eye, adding layers and textures that raises the music above primitive metronome and defiled Sabbath riffing.

Sonically pitched more towards the earlier battering of the Streetcleaner and Pure, A World Lit Only By Fire still incorporates the dub experimentation of Us And Them and the expansive production of Hymns, but honed and better integrated with the core of the music. The production is sleek and gives an edge to tracks like Shut Me Down with its doom influenced refrains and fleeting samples. On Carrion and Obeyed, both feature pulsing, throbbing beats that are almost danceable in nature but pushed further by the filthy baselines or guitars that swoop and collide in a dizzying fashion over jarring riffs. Both the tracks are Shamanistic in groove and are perfect for instilling violent mosh pits in a live setting.

Considering the often robotic feel of the genre, at times Godflesh have a very human voice. Buried under the savagery of their seventh studio album, Broadrick voices disenfranchisement and urban decay like the works of Sci-fi writers Philip K Dick and William Gibson. Along side his trademark deathly growl on Life Giver Life Taker and Imperator he employs that strangely mournful delivery more associated with Jesu, evoking a lament for a smoking ruins of an industrial wasteland and on the drone laden closing track Forgive Our Fathers there is a pleading and helplessness that is strangely a fair cry from the cold hearted mechanical clank and the tortured nihilistic howl, born from Cold War terror and twisted into modern misanthropy. Anguish has never sounded so universal.

I could wax lyrical about every single track on the album such is the strength of it. It is an album that absolutely crushes on all levels, from the jack hammer thump of the drums, the scything feedback of the guitar and the grimy low end grind of the bass, the whole feel owes as much to the idea of humanity sent back to the dark ages, as it does to the once futuristic technology that gave the band life. In this world awash with terrorist threats, the still echoing fear of nuclear war and global pandemics, it is not hard to picture A World Lit Only By Fire as a dystopian nightmare prophecy; Godflesh‘s latest, and possibly most important album, is the perfect soundtrack.

Some bands age gracefully and thankfully Broaderick’s sabbatical from the vicious part of his psyche, has done the power of Godflesh the world of good. At the time the band dissolved it was hard to imagine the hole they would have left in the scene as the bands they inspired also withered, but here they are reborn as fresh and as dynamic and important as they have ever sounded. Perversely for such a dark album, full of dark subject matter, this latest opus sounds like a triumph, a celebration of that fire that, in a post-apocalyptic world, still gives us hope.

All hail the new (God)flesh.