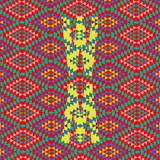 Goat are a mysterious collective who originate from Korpilombolo, a tiny village situated in the northern reaches of Sweden, their debut ‘World Music’ follows on from their hotly tipped and highly infectious single ‘Goatman’ which was put out earlier in the year. The anonymous, masked collective tell a tale about their home village being steeped in hidden voodoo traditions after a travelling witch doctor settled there some time ago, hence forth infusing their sound with afro-influenced beats and instrumentation. Despite their vague collusions as to whom the actual members of Goat are and the bizarre backstory to the groups origins, the album they have spewed forth does not sound as disparate or out there as you would imagine, in fact its highly accessible, proving popular amongst a scarily large musical demographic. The band themselves describe their recordings and indeed their lifestyle as ‘invocations, prayers, and total rejoice!’ which goes someway to explaining the voodoo ridden, psychedelic forays that are presented on ‘World Music’.

Throughout the album there are a crazy amount of influences going on, from the aforementioned African influence, to space rock, psych, post punk, funk and drones, all of which are casually thrown into the mix. The fact that Goat manage to combine all these influences without sounding contrived or like they are trying too hard, is simply amazing. The fun factor is there as well, no disappearing down roads of long winded, chin stroking instrumentals and freak out exercises just for the sake of posturing, everything is concise and with purpose, the main purpose being to uplift, not depress.

From the opening riff of ‘Diarabi’ which builds with intense use of instrumentation to a blissed out psych crescendo sets the mood perfectly before a vocal snippet beckons the glory of their single ‘Goatman’, female vocal hooks are backed up by a combination of bongos, psych guitar work and funk ridden baselines to create a simply contagious track (little wonder this was chosen as the single, it just sums up the band to a T). A similar vibe is followed with ‘Goathead’ with its excessive female vox and African influence turned up to the max, belting out an absolute riotous track before ending with a mellow, folk tinged outro against the backdrop of waves crashing on the shoreline.

‘Disco Fever’ and ‘Golden Dawn’ bring back the sounds of yore, the psychedelic vibe of the 60’s/early 70’s are captured beautifully, combined with Goats innate ability to mesmerize and enthrall with very subtle grace, showing why this record is just so addictive and serves as a great escape from the grinding, monotony of everyday life. ‘let it Bleed’ and ‘Run to Your Mama’ are two of the best tracks on the album in my opinion, combining all the elements of the previous works and injecting them both with a serious dose of booty shaking funk, from the heavy bass and sax freak-outs found on ‘Let it Bleed’ to the OTT afro-beat/guitar work of ‘Run to Your Mama’, everything just comes together perfectly.

The final two tracks finish the album off with ritual tinged, kraut rock excursions, spaced out and soothing, providing the perfect comedown from the intense, infectious rhythms that came before. Album of the year for me and I don’t seem to be alone in this choice with ‘World Music’ cropping up on many a ‘best of’ list and with good reason! A simply stunning debut album from one of the most talked about newcomers of the year…all hail the mighty Goat!