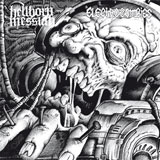 Shock! Horror! Latin America quakes with the old-skool power of blackened CRUST. After seeing these foul and heavy skull fuckers maiming the crowd t’other night at the Star & Garter it was only proper that this new split ep I picked up gets a right royal review. The five tracks from Chile’s infernally brilliant Electrozombies are absolutely stunning – think of Brummie crust titans Doom with a shit stain of sludge and a toxic pinch of old fashioned death/black metal. Insanely good. Better than most things you can buy at the moment. Scowling Crustafarian death dwarf Comegato’s guttural throat rasping and savage buzzsawing guitar are pure sodding class, and the punkishly emaciated Zamorano sisters lay down a veritable blitzkrieg of cement mixing bass and drums. It’s wild man, it’s like the world has gone totally fucking post-modern – a three piece punk crust troupe from a big bad city on the edge of the Andes playing like they’ve just hit the stinking stage of the Mermaid pub in grimy Birmingham, circa 1986.

‘Blood Altar’ snaps off with ominously fuzzing bass and a simple muscular beat. The production is cracking – loud and heavy, almost like the sound John Peel’s producer used to get on the old sessions at the BBC. ‘Silent Death’ is a monolithic slab of blistering doom crust, whilst ‘Smash/Rip/Destroy’ hurtles into your cerebral cavity like an iron steam train loaded with brandy snaps and semtex. ‘The Brains are Dead’ continues the beautifully simple and doom-charred chord progressions and the furious slow and fast tempo bucks like a cheap donkey whore. Last track ‘Condenados a la Extincion’ is a lovely dirge of down tuned riffage hanging and spluttering whilst Comegato intones thick words of barely recognisable Spanish over Paola and Marcela’s bloated and serpentine rhythms. Indispensable sounds for any thirty/forty something punkophiliac with a cold chip still on their shoulder and a deep down death wish for the whole sick world.

Germany’s Hellborn Messiah were a bit of a friggin’ surprise for me. I knew not of their violent sound, so I was pleasantly surprised when huge walloping guitars came crunching out o’ me tweeters. The vocals are painfully raw and fucked off, and the vibes are pure punk, crust and grind, shot through with a mean lean heavy metal guitar sound. ‘Food for the Vultures’ blasts out like Heresy dicking Extreme Noise Terror. The two singers are really really fucking angry, like they’ve had their penis’s confiscated by the bastard police, and the tempos wildly veer from snare drum ripping HC blasts to Discharge style mid-tempo bludgeon. ‘Narcotism’ and ‘My Own War’ are as doomfully heavy as they are punk-rockingly intense. Musical paint-stripper. Dark as the inside of a hole, and as pessimistic as a clinical depressive on a crack come-down. It’s the dead-end eighties again, and the Electrozombies and Hellborn Messiah burst like a rancid cancer from Thatcher’s disused cunt and puke their black bile all over the rotting corpse of democracy. Amen.