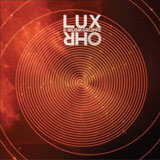 The six letters, one hyphen combo ‘E-musik’ makes me instantly think of Neu! The fifth track on their legendary Neu! 75 album, ‘E-musik’ stood for ‘ernste Musik’ (earnest music), and one can only imagine whether they were taking the piss or being deadly serious  – Krautrock had, by that time, become a legitimate art form, yet Neu! persisted in pushing the boundaries of what their Teutonic contemporaries deemed ‘acceptable’.

Take for example the fact that 75 had more of an influence on punks and post-punks than jam-happy cosmonauts… the rigid precision of their motorik sound, combined with kaleidoscopic space-age flourishes, made for an endlessly entertaining set of albums. I, for one, have revisited the first three Neu! records with an almost religious diligence.

E-Musikgruppe Lux Ohr, according to my rudimentary (at best) German would mean something like ‘Luxury Ear Earnest Music’ (please correct me if I’m wrong, German speakers). And to a large extent, that is EXACTLY how they sound – the two kosmische constructions that make up ‘Spiralo’ are endlessly pleasing to these ears. If, like me, you’re a fan of all things Kraut, you’ll want to wrap your noggin around the voyage that ‘Spiralo’ has the potential to send you on.

Only, they’re not Krauts at all – not even close. These intergalactic tricksters are from a far colder realm of the galaxy – Finland. They obviously have obsessive psychonauts amongst their ranks – Pertti Grönholm, Jaakko Penttinen and Ismo Virta are joined by the ‘already famous’ Kimi Kärki. They have an interest, primarily, in all things Neu!, Harmonia and Cluster (the Berlin School) – and their willingness to perpetuate the blissful galactic odysseys of their Northern European forebears is as emphatic as it is convincing.

The first item, or ‘Spiralo 1’, is constructed of waves of complete sedation. Washes of synthetic colour are split by electronic blips and beeps… but it’s really a lot more than that. It provides an immersive, comforting sonic spectrum with which the listener can undertake their own internal monologues or fantasies. It happens to be both sparse AND densely populated, depending on which groove you mentally track – if you listen at a suitably loud volume, there are snatches of tribal tom-tom percussion sounds mixed in with the sharp stabs of synthesised melody.

Suddenly the track becomes a dusty skeleton of its original form: the rhythms become less pronounced, the sounds become less intrusive and more spaced-out. It’s as though time itself is stretching around you – where once the synth washes were even and frequent, they seem to become rarer and less potent. This, of course, adds to the essential kinesis of the art form. In order to retain the interest of a listener, long-form pieces must retain some form of dynamics – E.L.O. (interesting acronym, don’tcha think?) are masters of subtlety in this regard.

The second item, ‘Spiralo 2’ is completely divorced from the idea of relaxation, but is nonetheless fraught with total bliss. Imagine the difference between sitting in a chair (while high) and running for a train (while high) – both require different motor functions to engage, and both require differing levels of sensory awareness BUT both provide you with moments of reflection and a connection to the waves of electromagnetic energy spewed forth from Mother Earth.

At the five-minute mark of ‘Spiralo 2’, a strong bass rhythm becomes the focal point of the track. It’s a complete fucking surprise, too – the deep, pounding thrum comes from out of nowhere. E.L.O. build from the bass upwards in the remaining movements of the track – it’s a constant amongst the endlessly shifting melodic embellishments, and becomes almost unnoticeable by the end of the track. The groove is that potent!

In other words – without all the new-age mumbo-jumbo – the first tune invites you to chill out, the second tune forces you to be calm by presenting you with hectic, constantly oscillating sonic information that could lead to severe consequences if not dealt with in the correct set and setting.

Despite not indulging in any ‘relaxants’ for over a month, this album hit me like a freight-train on first listen. It was a freight-train made completely of infra-red and ultra-violet lights that immediately exploded upon connection with my eardrums and filled my head with kaleidoscopic visions of an interplanetary utopia. It’ll do the same for you, I promise.