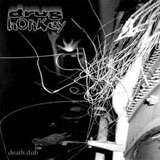 Drug Honkey are perverts of sound, purveyors of absolute filth and clearly deviants of the nth degree. Imagine taking a copy of ‘Streetcleaner’ and using it to strain raw sewage – THAT filthy. The eight scabrous tracks that make up the vile body of ‘Death Dub’ plumb new depths in audio depravity and inhabit an area somewhere between the rusted mechanised murk of Skin Chamber and the acid-fried distorto-freakism of prime Butthole Surfers.

Opening salvo ‘My Sins’ is a bass-grinding headfuck of needling guitar and seriously fucked with vocals, ranging from the guttural roar of a Tyrannosaurus Rex to a pixelated screaming elf, and following onslaught ‘The Devil Lasts Forever’ drags us further down the festering rabbit-hole by layering on swathes of treated noise and amping up the teeth-rattling guitar needling a notch.

This is some ugly stuff right here.

‘Death Threats’ mines the pitch-dark dub ambience of later Painkiller and Scorn material, all pulse-drumming, subsonic bass and malevolent sandstorms of electronics, whilst ‘Communion’ piles shrieking ‘Streetcleaner’-esque guitars and squabbling, squalling venomous vocals atop the death dub. ‘I Can Not’ is a crawling, sprawling digital dirge awash with scathing electronics and a vocal pitched so low it becomes completely inhuman. A total black hole of relentless doom and chittering, scrabbling guitar. ‘China Black (Heroin Pt.2)’ is a live recording of a track that would fit right in on any Butthole Surfers live record, circa ‘Locust Abortion Technician’ and ‘Hairway To Steven’. A low-key glide of bass and restrained drums carry the track along beneath some supremely fried Paul Leary-style guitar, throbbing synth and utterly warped, completely malevolent vocal eruptions.

Penultimate track, ‘Burundi (Reconstruct)’, professes to be a cover version of a track by industrial supergroup Pigface, from their ‘A New High In Low’ album, and given the evidence of the track itself – trademark Atkins drum pattern a killer bass-groove and what sounds like a snarling hoover – I have no reason to doubt it, since it isn’t one that I’m familiar with. ‘Death Dub’ climaxes with the short, and not in any way sweet, ejaculation of ‘Who the Fuck?’ a track that sounds like a jump-cut pile-up of everything that has previously happened all at the same time.

It seems that I’m not the only one impressed by the squalid dirge that these sickos vomit forth as the ever tasteful Diabolical Conquest records has now taken Drug Honkey under their wing. Hopefully that means bigger things for these reprobates, just so long as it doesn’t involve violating their restraining order against polite society…….