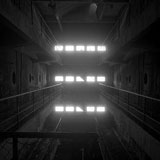 France has been throwing up some verrrrrry interrrrestink extreme musick over the last few years, what with Deathspell Omega, Monarch!, Alcest, Amesoeurs, Gojira etc, and punishingly bleak, psychedelic-industrial-tinged sludgesters Danishmendt are yet another feather in the collective gallic cap.

Try to imagine an up-tempo Khanate playing heavily drugged-out Thorns covers, or a rusted, scrapyard Meshuggah, at their most psychedelic, trapped and flailing in a hall of mirrors and you’ll be some way toward approximating the sound made by these five deviants. Kin to such degenerates as Gnaw, Axis Of Perdition and fellow countrymen Celeste, Danishmendt are a pulsing, throbbing black hole of bleakly kaleidoscopic riffs, hoarse, phlegm-spattered vocals and hissing, dreadful dark ambience.

Emerging from a miasma of roiling electronic murk, a vocal howl from dead space calls out like the ghost of Justin Broadrick, only to be silenced by an icily telescoping guitar avalanche. A deeply thrumming rhythm section joins the fray and opening track ‘La Source’ is underway. Moving at a restrained pace, the throbbing bass and acidic tangle of guitar drive the track onwards, vocals half submerged and a general ambience of dread covering all like a deathly pall.

Following on from this, ‘Lumpen Heros’ is built around a pounding jackhammer rhythm, and a veritable pileup of discordant swarming guitars, giving the track a definite Black metal ambience. The track devolves into a lurching stomp as those guitars circle like vultures and chime out to a shuddering stop.

The icy grip of Black Metal takes a hold of the following number, ‘Chutes / Vertiges et vestiges’, also – all rolling drums and cold, cold buzzing guitars, slowly grinding down to a lurching crawl and atonal scrabbling and humming. ‘Revelations’ is a propulsive ball of amphetamine-driven rage, and sounds not unlike a smashed mirror cloaked in white noise. The creaking, creeping, crawling darkness of ‘Das Boot’ is the sound of bells chiming at the bottom of the Marianis Trench and the insistent hammering of something far away that you really do not want to come any nearer. John Carpenter-levels of dread are evoked.

Once the goosebumps have settled, Danishmendt choose to pull the rug out from under the listener even more violently with ‘Une Houle D’Un Siecle’, a spookily fractured lament. A brittle guitar rakes out discomfortingly acrid shapes that verge on melody whilst hoarse vocals declaim and moan throatily, to be eventually joined by skeletal drums and almost an almost dub-like bassquake. One gets the feeling that THIS is what passes for a ballad in Danishmendt-land. Crrrrrreepy.

This latter half of ‘Un Passé Aride’ shows definite signs of post-punk influence, what with the deep, deep bass and brittle, trebly guitars. The spirits of Killing Joke and their kin are subtly invoked, in amongst the scourging Black Metal and sludge aspects. ‘Refuge’ seems particularly infused with the spirits of Geordie Walker and Youth to these ears – being driven along on a stop-start, rolling bass rhythm and sparse, tribal drums, with chiming, ringing guitar notes snaking out around the deep throb.

The album ends with the lysergic trudge of ‘Credo (Zero Absolu)’, a fifteen-minute epic that still manages to feel hellishly claustrophobic, despite its cosmic expanse. Opening with a sub-sonic bass line, the track just ooooozes menace – particularly during the mid-section, in which just-on-the-edge-of-hearing layers of ambient sound are layered above the bass, drums and guitars, adding further sonic weight and really pushing the claustrophobia angle. Dense, fractured, creepy and malevolent, it’s a perfectly unsettling note to end on.

The grey, bleak coldness of the music extends out into the packaging that surrounds it, with outer cover and inner booklet comprising stark black and white images of abandoned factories and prisons, thick with dust, rust and decay.

File ‘Un Passé Aride’ under ‘uneasy listening’ and wrap up warmly, the atmosphere herein is sub-arctic, dark and inhospitable, and there IS no light at the end of this tunnel.