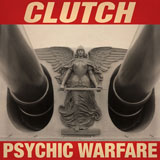 The opinions game is a strange one to play when writing about music. Even small samples of people are capable of delivering a wide range of reactions when dealing with something as subjective as art. For example some blew hot and cold about Clutch‘s 2009 album Strange Cousins From The West whereas personally I loved it; those same people raved about the follow up, 2013’s Earthrocker which in all honestly didn’t blow me away as I expected it to.

That said the Maryland blues rockers have had such a prolific and varied output since their inception in 1991 that their back catalogue inevitably will have moments some will gravitate to more than others. One thing that is for certain is that the latest offering Psychic Warfare seems to have met with almost universal approval and is just one more reason why if you don’t love Clutch then there is a hole in your heart where joy should live.

Continuing in Earthrocker‘s more stripped down rocking vibe, Psychic Warfare opens with the intro sample The Affidavitwhere, channelling his best Tommy Lee Jones, singer Neil Fallon adopts the personality of a private detective asking someone to relate their story.

That story turns out to be the explosive lead single X-Ray Vision, a bullish, hard rocking, up tempo number that immediately gets your toe tapping and your head banging. If someone who had never heard Clutch and asked what they were like then this song is a perfect encapsulation of everything you love about the band; heavy blues rock that is as catchy as that flu from Outbreak, features great musical interplay between the band and topped by the ever articulate, intelligent word play from the vocalist about ghosts, aliens, conspiracy theories and the works of Philip K Dick.

Not pausing for breath they pile straight into Firebirds, a dirty low down boogie that underpins echoey verses and a towering huge chorus, harmonicas and an instrumental breakdown. Once again lyrically the band carves out a story driven by the way that the language works with itself tonally and the seemingly limitless imagination of the front man.

A Quick Death In Texas slows the pace to a choppy funk which effortlessly showcases just how talented all the performers are and like all the best Clutch anthems, have you singing the hook word for word by the second hearing. Despite similarities to some of the other material they have produced in recent years, this retains the more muscular edge that many felt was lacking before the last album.

Sucker For The Witch picks the pace back up and is seemingly built to drive you towards the massive pay off with its low end shuffle and clean guitars that at times remind you of Fallon’s side project, The Company Band, with its shimmering guitar and accessible driving tempo.

Your Love Is Incarceration strikes a similar tone to A Quick Death… with it’s bouncing, ear worm style full of intricate musical passages which helps back up JP Gastor’s claim that the material is more diverse than ever, by the fact that despite hitting several well-trodden ‘Clutch‘ tropes, it also sounds incredibly fresh for a band on their eleventh studio album.

Doom Saloon is one of those slow burning tracks that the band does so well like Regulator or Ghost from Blast Tyrant. In just under four minutes the band conjure a smoky atmosphere and wring more emotion from a tale than they probably have a right to, channelling an old school blues feel that narrates a world wary lyric, powerful and heartfelt over the swaying, soulful music.

Just in case you felt like drifting peacefully off at this point, Psychic Warfare slaps you square in the face with Noble Savage, the most energetic and driven blast of pure rock fury since, well Pure Rock Fury proving that Clutch aren’t about to rest on their laurels and allow the quality to drift at the back end of the album. Still danceable, the track packs a paunch that could ignite even the staunchest of mosh pits and Behold The Colossus continues this theme with its bruising rhythm.

After that one-two punch, Decapitation Blues struts in on a rolling groove before Son Of Virginia closes out the album with a western style tone that builds from a winding guitar into a slamming epic that allows Fallon carte blanche to spew his passionate narrative, ending the album on a sombre but powerful note before the conclusion of the opening narration humorously sees the detective character confessing to be perplexed by what has gone before.

For me Clutch have evolved through the years into a glorious celebration of heavy blues music; sonically ever shifting, even if they are merely making tiny refinements to things you thought they had previously perfected. Psychic Warfare is as good a statement of everything they do so well and reaches any previous high watermark they have hit.

If you are a fan of the band you don’t even need me to tell you that Clutch have hit another home run as the chances are I’m preaching to the converted. If you don’t know the band or haven’t heard them lately then what the hell are you still doing here? It’s out now, go listen and join the celebration.