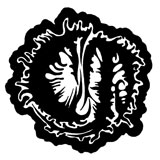 Coffin Torture are a sludgy duo from the great state of South Carolina, and their self titled release is one of three they sent me to listen to. That makes them stand up dudes to begin with, even before I slam their disc into the stereo. But one cannot allow such pleasantries to stand in the way of an honest review.

‘Coffin Torture’ opens with ‘Ol’ Gramps’, a title that is misleadingly country in my opinion, but is actually raw and dark sludge. There’s a suffocating quality here; the track is menacingly slow and brooding, and the vocals have that ‘gargling rotten blood’ feeling that is missing in a lot of modern sludge.

‘Mammoth Rider’ has a good, head nodding rhythm to it, a rumbling Southern groove underpinning another savage vocal performance. Alex Thorfinn really nails it here; he sounds unhinged and broken; like the voice of Satan with a sore throat. Coffin Torture go for the slow kill; the long, drawn out bleeding rather than the quick and painless. ‘Crawling Spleen’, as well as being one of the best titles for a sludge song I’ve heard since I became aware of EyeHateGod’s existence, is also a contender for ‘most nihilistic song of the year’. The guitar tone is tar thick, drowning the groove with distortion and murky bass tones. ‘Crawling Spleen’ is my personal highlight; it is made up of an ominous rumble that I really dig.

‘Aeons Passed’ is the longest track here, and Coffin Torture really ramp up the atmosphere on this one. It is crushingly dark and, while occasionally feeling a bit repetitive, comes off well. Coffin Torture weave some subtle blues into their riffs, and while the filth and darkness covers most of them, in ‘Aeons Passed’ you can hear the tortured soul within. The soul is such an integral part of sludge; it gives the darkness some body and some form to hang from, and a blues framework works so well in conveying that.

‘Saigon Tsavo’ closes the release with some thick, blackened groove and more vomiting vocals. ‘Coffin Torture’ is a good release, full of that aural hatred and one of the nastier vocalists I have had the pleasure of hearing. I’d like to see Coffin Torture expand on some of their ideas a bit on their next release; they occasionally lapse into repetition and feel a bit samey but the ideas and talent is there. Work a bit on execution and this could be a band we hear big things about.