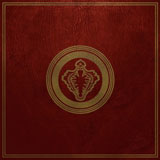 As the majority stride onwards into 2016, recent weeks have brought us music lovers unprecedented waves of pain as we watch some of our most decorated innovators fall to those invisible tumours of doom. Bowie: cancer. Lemmy: cancer. Glen Frey: pneumonia. Jimmy Bain: pneumonia. Wogan: cancer (plus the annual trauma that was Eurovision). Men and women all of great stature and presence, of impeccable taste and curiosity, of inspiration and beauty, teaming with ideas and talents that history will surely never forget. Now the world needs some new heroes, some new varieties of creative genius, some new residents of white-space thought and leftfield vision. We’re looking for the sort of human who lives in a remote wooden church in the middle of a forest, who names his band after a garbage dump, who receives funding from the Norwegian Arts Council solely to commit whatever insane noises to tape as he pleases and who has already kicked cancer squarely in the nads.

Kjetil Nernes is one such human and Årabrot, conversely, is Kjetil Nernes. Along with his ever-revolving cast of free-thinking companions, Kjetil and Årabrot have come to be known as one of Europe’s most mesmeric exponents of a brand of music that’s usually loosely lumped under the bracket of “noise-rock”. But in fact, Årabrot are a whole lot more – they’re dark jazz, opera, electronica, heavy metal, avant garde, goth rock and spoken-word poetry all intertwined as one. To me at least, the collective’s more recent audio-visual output could simply be described as “art”.

The Gospel is Årabrot’s seventh studio full-length, arising from the same portfolio as the Norwegian Grammy-winning Solar Anus, the terrifying, horror-strewn self-titled record and the two more recent and ever-more diverse EPs I Modi and You Bunch Of Idiots. With Kjetil roping in the likes of Stephen O’Malley (SunnO))), Khanate, Burning Witch et al) to add his drone guitars, Ted Parsons (Killing Joke, Swans, Prong, Godflesh, Jesu) to play drums/percussion and Norwegian electro-pop star Karin Park to add her multitude of talents behind the piano, vocals, and mellotron; you would think this would be the key to unlocking the door to the most multi-dimensional, bizarre and accomplished Årabrot release to-date…

Well you’d be right about the latter, but not the former. The Gospel is very much still all a vision in Kjetil’s unique mind. From the opening thunderous ode to Killing Joke that is the title-track, he lays his story open and bare, staring down the gauntlet of his months fighting cancer in 2014. The bellowing “tall white stranger, laughing with hatred, an appearance gaunt and hollow” shows the frontman back firing on all cylinders and “left on fire” after “iron’s point” of an operation that left him with a throat-long scar right up his neck. The song itself is a triumph, brooding with the menace of a solemn bassline and reverberating Nernes’ snarling, matter-of-fact tale back off Parsons’ distinctive snare-snaps.

Said tale flows on through I Run – a nightmare journey of desperate mental escape and emotional torture whilst the rolling drums and surfing guitars chase the listener across a dark, dark landscape. Karin Park’s piano chords stab like an ice-cold knife out of the “pitch-black afterlife” to leave us reeling in an eerie and unsettling piece of tension-laden horror-pop. Tall Man contains a more recognisable, more Årabrot sense of imposing dread as a simple drum-beat and some uplifting guitar, work alongside the curdling sweetness of the piano, illuminates the vocals without easily disseminating the meaning of the lyrics. It’s an ever-varying riot of different vocal textures, start-stop tempos and houses a chorus as big as any orchestra in Scandinavia.

Faustus is a longer piece, plagued from the beginning with samples of sounds from life in yesteryear, whether that be the quirky, harmonium ditties or the medieval-sounding vocal lines, eventually giving way to a haunting, yet simple guitar riff that sees us through the duration. Likely cast as a point-of-view of Thomas De Quincey’s criticism of the Christopher Marlowe play The Tragical History Of The Life And Death Of Doctor Faustus, it’s a solemn piece of music that makes me want to go away and bury my head in history books to decipher its innermost meanings.

No such bliss is felt with Ah Feel and The Whore Is This City, both of which slam you back into the skull-denting, noisy pastiches of Norway’s finest garbage dump. Rocking riffs, jolting bass rhythms and Kjetil’s devilish sneer all pass your ears as the singer wills “Oh, triple-faced Hecate, let your dogs upon me” in and amongst the barrelling waves of chest-thrusting power. Similarly, I Am The Sun ramps up the intensity of the guitars, jamming you alongside batteries of taut piano, juddering guitars and warped electronics until you fall into the tragedy of child death in a song that’s likely inspired by the Swans track of the same name, married to a few other inspirations.

Darkest Day is another firm highlight as the big ‘Brot somehow marry Big Black, Ministry and The Jesus Lizard into one careering train ride of battered bliss. With Kjetil proudly proclaiming “it won’t get much darker than this”, it’s hard to disagree with this jarring statement of intent.

Closer Rebekka (Tragedie) is another warped, morbid tale of death, insanity and hatred direct from Kjetil’s mind, positioned next to a headaching thud of a bassline, to sound like a lifetime of listening to Sonic Youth in a torture chamber next to Steve Albini with a migraine. Cheery choruses and massive chunky guitar riffs you will not find here with Årabrot, only an unhealthy dose of unsettling spoken-word ambiguity and minimalistic lullabies from the bleak beyond.

Back into reality here in 2016, the musical world should embrace those who bring us records that challenge our traditional thoughts, structures, sonics and integrity. The world needs innovators like Kjetil Nernes who does, whatever it is he does, in order to make something beautiful and unique, not because it’s “cool”, “conformist”, “part of a scene” or “on-trend” in order to simply make Årabrot just another band that everyone simply describes as “heavy”. You can’t take a record as complex and as artistically well-layered as The Gospel and call it something as simple as “metal” or “noise-rock” anymore; there are just too many other strands of artistic imagination at play here. This is ultimately, for those with the attention span and cranium capacity, another Årabrot masterpiece. How long before we are summoned into that labyrinth of a mind once again? Based on Kjetil & co.’s recent track record, it’s unlikely to be longer than a few weeks before they return to preach to us once again.