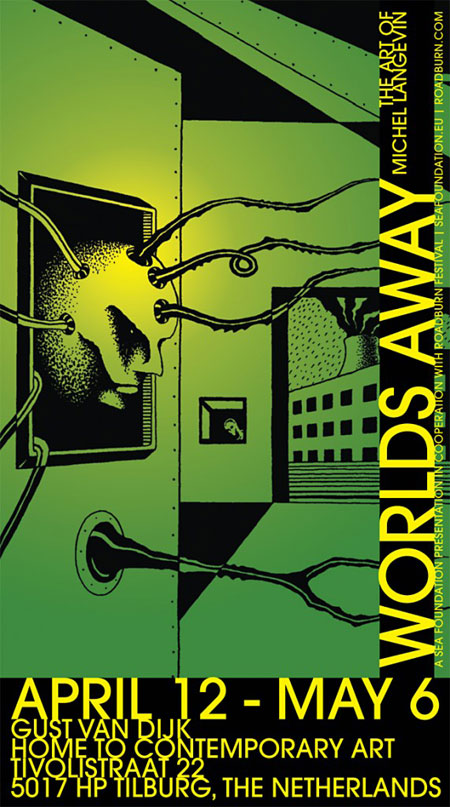 Roadburn are thrilled to announce that the exhibition Worlds Away – The Art of Michel Langevin will be part of Roadburn Festival 2012. The exhibition will feature work by Voivod drummer and artist Michel ‘Away’ Langevin, who together with his fellow bandmates is curating the special Au-delà du Réel event this year.

Gust van Dijk, Home to Contemporary Art, will host the exhibition. The gallery is located just around the corner and up the street from the 013 and Patronaat venues. You may have been there during last year’s festival to marvel at Ester Segarra’s photography.

Michel ‘Away’ Langevin (48) was born under the sign of Gemini, which seems apt for someone who is consistently described as down to earth but whose art is revered for being so far out. As the drummer and founding member of the mighty Voivod, he began touring the globe in the mid-Eighties and hasn’t stopped yet. As an artist, he likes nothing more than to retire to his studio in splendid isolation to create with his pencils, inks and computer. These contradictions are alive and well in his art, where ancient history collides with the future, aliens meet archetypes, and insects share a tender embrace against a backdrop of warheads.

Growing up in Kenogami, a small town north of Montreal, the din of nearby factories and news reports of nuclear proliferation fed Michel’s anxiety and dystopian visions. Initially, music and art offered an escape; later, they became an outlet. Michel credits myriad publications, films and music with influencing his art and providing inspiration, such as Philippe Druillet (Metal Hurlant), whose mutant warriors in Urm le Fou sowed the seeds of imagination for the Voivod character.

Scenes from films that impressed him at a young age would weave their way into his artwork: once the stuff of nightmares, he enlisted the giant arachnid from The Incredible Shrinking Man to tow a carnival trailer on Angel Rat, Voivod’s sixth album. Rodney Matthews’ cover art for Nazareth’s No Mean City made an indelible impression but it was the prog band Magma that provided Michel with the template for the first Voivod shirts. The one-time chemistry student is a true alchemist at heart.

Those spidery lines, those imploring stares, the astronomical symbols, the phantasmagoric landscapes, the alien nations, and the alienation itself: you can tell Michel’s work from a million light years away.